Latinos on the move: from Brazil to South Asia

Brazil - The kids that come into the children’s homes she works for are sad and afraid of everything new. After a little while, Vanilda Vaz sees them revive. “My work is all about love”, she says. “Sharing the most precious value I’ve been learning: that God can change people’s lives.”

The 28-year old Brazilian has been travelling to Peru, Ecuador, Costa Rica, El Salvador, Guatemala and Mexico. Vanilda’s aim is to tell as many Latinos as possible about her work in South Asia.

Armed with lots of pictures, some videos and a great story to tell, Vanilda visited a large number of churches, youth groups and prayer teams throughout Latin America. When talking about South Asia, her eyes start to twinkle. “I miss the country”, she says. “It’s nice to be in Latin America for a while, but I can’t wait to go back.”

It is almost three years ago that the young Brazilian first arrived in South Asia. Before that, she had been part of a five month training in São Paulo. After spending two holidays with an OM Global Challenge programme, she had already decided that she wanted to spend more time in ministry. “I wanted to go to a foreign country right away”, she explains. “But I had no financial support.”

A donation from the United States made it possible for Vanilda to join the training in her home country, Brazil. “When I finished this training, something changed in my church. The leaders realized that they had to take the responsibility of sponsoring me. That made it possible for me to go to South Asia.”

She is a lucky girl. For most Latin churches, it is highly unusual to provide for the full financial support of overseas workers, Vanilda says. “That is a problem. Many churches in Latin America are not overseas ministry-minded, but prefer to construct nice buildings.”

With her tour through the continent, she hopes to contribute something on the ministry focus of churches. “I think that OM can play an important role in this. Not only to encourage Latinos to go into overseas ministry, but also to make churches aware of the necessity to support them with prayer and money.”

The need for Christian workers throughout the world is huge, she states. “There are yet so many lives to be saved and there is so much relief and development work to do.” In South Asia, Vanilda says she got to meet real poverty for the first time. “I think going into overseas ministry made me face reality. It was a good experience, though. You can hear a lot in your own environment, but once you go out to a place like South Asia, it’s completely different.”

South Asia is certainly is a country in need. Many poor people in the villages have to send their kids to children’s homes in the country’s capital. At the age of six, children have to leave, because their parents cannot afford to pay for their education and school uniforms.

When Vanilda first heard about the need in these homes, she immediately knew that working there was what God called her to do. For two and a half years now, she has been working in two different children’s homes.

“These homes are set up by organizations”, Vanilda explains. “My job is to teach the children mathematics, English and lessons from the Bible. The most important thing, however, is that I organize nice things for them to do. Fun things, like going to the zoo or simply playing a game.”

These activities help them to enjoy their childhood again, she states. “What these kids mostly lack, is love. When they come into the children’s home, most of them are sad and afraid of everything new. But after a while, you can tell they are cheerful again.”

Her work practically is all about giving love, Vanilda says. “I am sharing with the kids the most precious value I’ve been learning: that God can change people’s lives. There is no bigger love than the love of God, who sent his only Son to die for us.” Many children in the homes give their lives to Jesus. “When they grow older, a lot of kids go back to their families and tell them about the Bible too.”

Vanilda is thrilled to see God at work in South Asia in many ways. “I can’t do anything, but I can share the message of our God that can change people’s lives.” She definitely feels that she is in the right place in South Asia. “I’m excited to go back. And I encourage other Latinos to go into overseas ministry as well. Even if that means facing reality.” 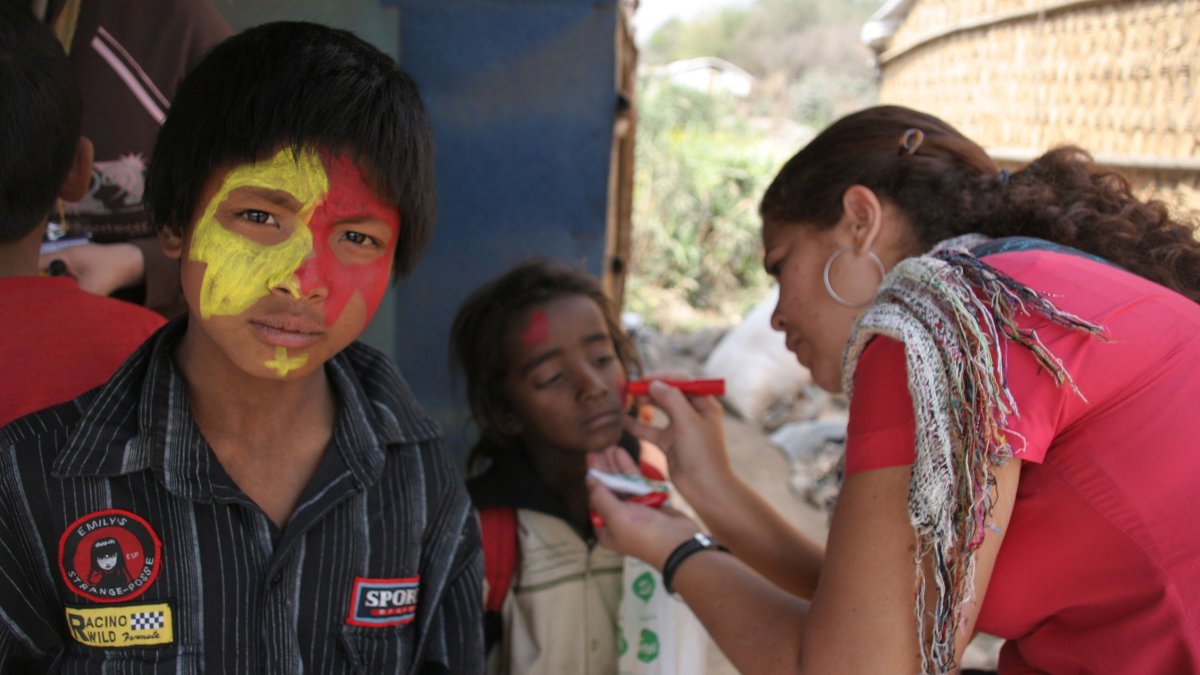 Kids get their faces painted in a children's home in Nepal.