“I never thought I’d see my husband driving with a head-covered lady in the back of his car,” says Afke from The Netherlands, while she pauses from playing shuffleboard with 20-year-old Mahmud* from Syria. “He wouldn’t have believed me if I told him that he’d be having so much fun with immigrants. But here we are. This ministry has changed our lives.”

A year ago, Afke confesses, she cried at times watching news of the large influx of people seeking refuge in Europe due to war in Middle Eastern nations. Thousands of people, mainly from Syria and Afghanistan, arrived in her country daily, seeking a new home.

“I was scared of what would happen to our country and our identity,” she shares, sitting around a coffee table with about 10 refugee men. “But I realised that it’s our duty as Christians to come alongside people in need. Now that I’ve come to know some immigrants, I enjoy them so much. It’s so rewarding to give them love and warmth!”

Afke and her husband Bert, a retired couple from Emmeloord, are part of the ministry that OM workers Ray Strong* and his wife set up in this town in January 2016, together with their local church. Ray's wife, who has also been co-running a women’s group in the nearby asylum centre for several years, shares how they responded to the large influx of immigrants: “We realised that our church building is centrally located near several low-budget stores where many asylum seekers run their errands, and that they receive their weekly payment on Tuesdays. So we put up a simple sign and opened our church on Tuesday afternoons offering coffee, tea and a chat.”

People started coming, and invited friends, too—soon around 25 people every week. As Arabic speakers, the Strongs chat and help fill out official forms. Bert and Afke serve with hands and feet, driving people to church on Sundays, helping with language classes or repairing bicycles. Several other church members serve the immigrants faithfully in whatever way they can.

The team extended Tuesday afternoon gatherings with an evening meal and an Al Massira course on the general principles of the Bible and Christian faith. “We started with a group of 14 but were afraid that people would be scared off after the first time,” recalls Ray's wife. “Surprisingly, more people came in the following weeks, and we’re planning to invite them for a meal in our house.”

People come and go. If they are allowed to stay in the Netherlands, they don’t get to choose where they’ll live. “We’ve had so many different people coming through here,” she says. “We can’t keep in touch with all of them but pray that they’ll settle well in their new homes.”

As in the Netherlands, many OM workers around Europe have felt the same call to reach out to refugees settling in their countries. OM believes that this is a critical moment where the Church can make a huge impact. Local Christians know the social situation and speak the language; they can be Jesus’ hands and feet very effectively. As churches reach out to immigrants, Jesus’ love through them becomes visible not only to the newcomers, but also to local society and government.

Oftentimes, providing assistance with language study is a great way to connect to immigrants. OM teams in Spain, France, Austria and the UK help newcomers to learn their tongue. OM's Xenos team—Greek for ‘stranger’—works with immigrants and asylum seekers in Germany, meeting them with love, friendship and acceptance, introducing Jesus and what it means to be a follower of Christ. In Finland, OM workers extend love and fellowship to immigrant mothers through friendship groups, open conversation and learning together. And so on.

Many OM workers around Europe have become close friends with ‘strangers’ from abroad, several of whom have accepted Jesus Christ as Saviour.

A bit of courage

For 22-year-old George* from Syria, the weekly gatherings in the church in Emmeloord have been very helpful in his study of the Dutch language. Only eight months after his risky escape from the war together with his father, he acts as a capable translator for his countrymen around the table.

George is anxiously waiting for a response from the immigration office. His mother and sister are still trying to survive in one of the most war-torn cities in Syria. As soon as he and his father get their paperwork done, they’re hoping to reunite with them in the Netherlands. He would love to go back to university; studying had become impossible in Syria. “I’m still young, you know,” he says. “The most important thing is that I’m still alive. With a little bit of courage, I’m sure I can make it here.”

He says goodbye to Afke and the other volunteers. “I just love these guys,” she whispers, smiling. “See you next week!”

Anneke Bolt, from the Netherlands, started her work with OM in Latin America and is now back in her home country coordinating communications for OM in Europe. Anneke is a journalist and loves to write, edit and ask lots of questions. 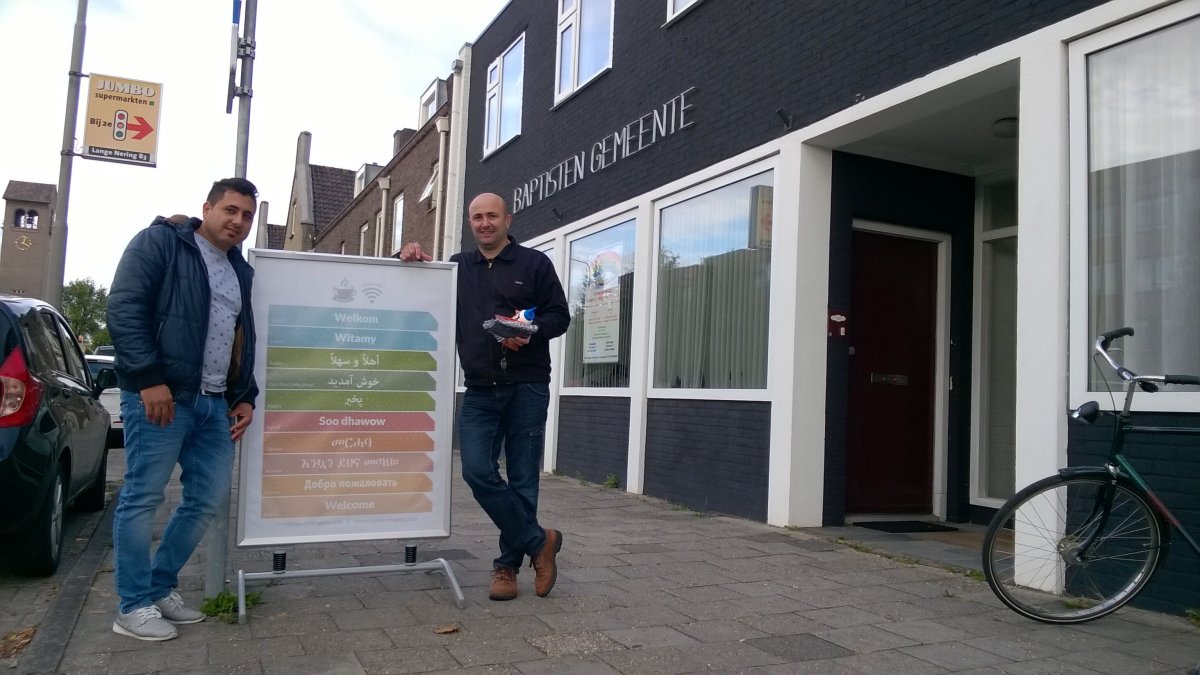 Two immigrant men pose outside of the Baptist church building in Emmeloord, where OM workers and church members organise a walk-in for immigrants every Tuesday afternoon. 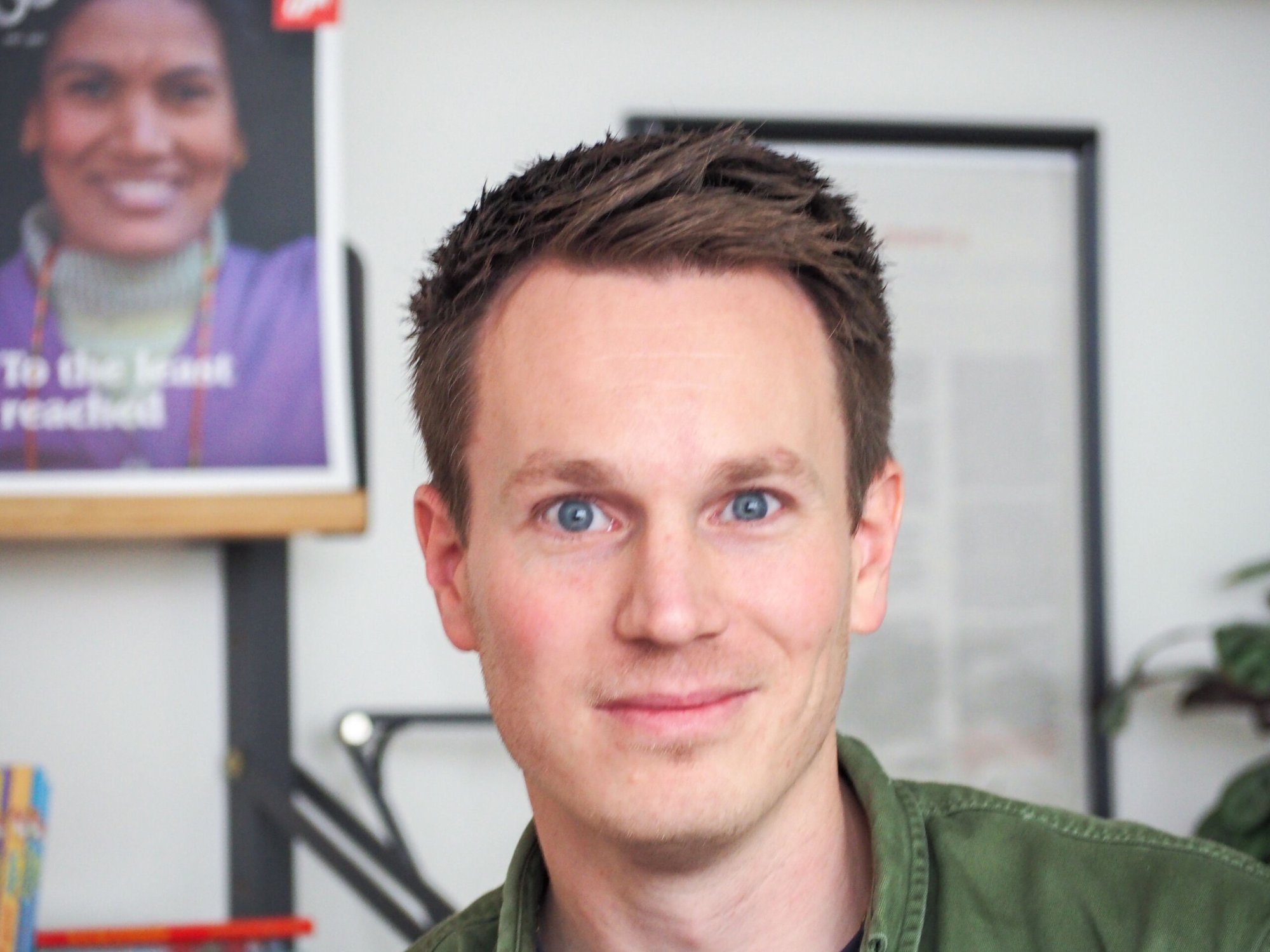 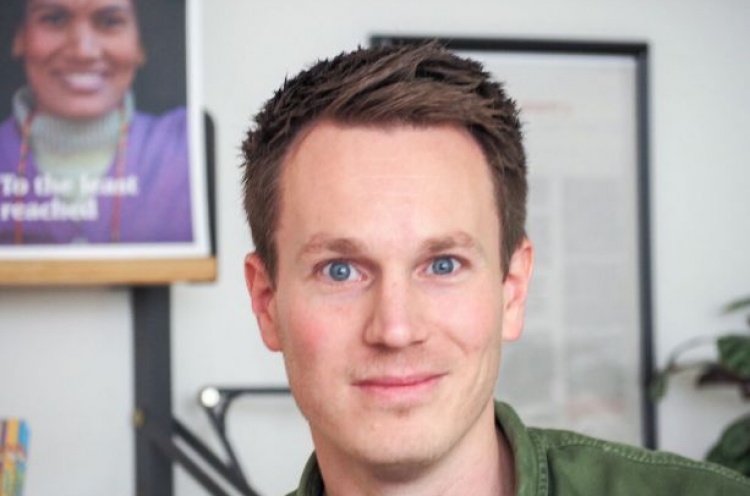 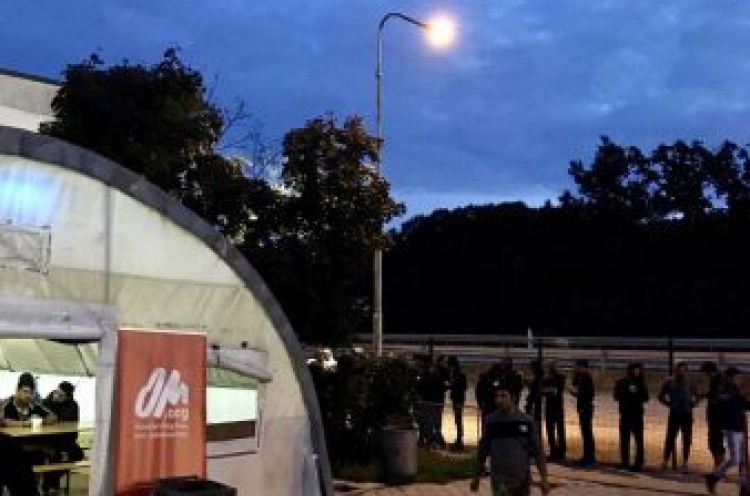 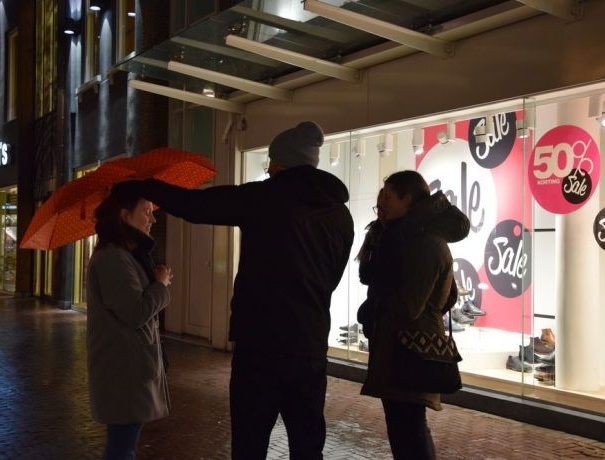