Carmen had envisioned a very different life after high school––university, one of Hong Kong’s well-paying jobs and the finances to support her parents––not the tuberculosis (TB) that now wracked her body or the countless daily visits to the clinic that shattered her studies and her dreams.

But, during her stay in the hospital, she met a fellow TB patient, a young Indonesian woman who had come to Hong Kong for work and who welcomed Carmen with a huge smile. One day, when Carmen saw the woman crying, she asked why, and the woman told her that she felt alone in Hong Kong and missed her family back home. She was a Muslim, she said, but knew Allah would not hear her prayers because she was not one of the Imams, a Muslim leader.

Carmen, who had begun following Jesus in high school, offered to pray for her. “I am a Christian,” she told her, “and I am 100 per cent sure that God will listen to my prayer.”

“After that,” Carmen says with a chuckle, “we had a really good time together in the hospital.” The two former patients still connect through Facebook.

In hindsight, Carmen realises that God used this encounter to broaden her compassion for Muslims and for the ethnic minorities who live in Hong Kong, setting the stage for her future work. As a result, she no longer sees her TB as a ‘curse’ but as God’s hand moving in disguise.

Today, nine years later, she helps run a centre in Hong Kong that provides educational and practical help to the Pakistani ethnic minority in Sham Shui Po, one of Hong Kong’s poorest districts. Through this work, her heart for Muslims and her empathy for Hong Kong’s ethnic minorities have blended.

“God really loves them,” she says. “And He needs people to tell them how [He] loves them.”

At the age of 16, Carmen experienced this love first-hand. She comes from a Buddhist family, but as a child in Hong Kong, she attended Christian primary and secondary schools, and in her third year of secondary school, she began attending daily Bible studies organised by a pastor. She describes these after-lunch small-group meetings as “a turning point” in her spiritual development, helping her resolve many of her questions and exposing her to worship songs and biblical teaching.

Around this time, she ended a relationship with her boyfriend, and, in the hormone-infused drama of high school, this also led to a falling out with another friend, leaving Carmen devastated. She was crying at home when the lyrics of a worship song popped into her head: “God is my refuge... He is my shelter... He will protect me.”

Peace filled her heart, a sense of calm she says she had never experienced from Buddhism. She called her pastor: “I want to become a Christian,” she said. “Tell me what to do.”

Her family found out about her decision when Carmen refused to attend that month’s ghost festival, where participants would burn money and prepare food and fruit for the ancestors. Shock and anger characterised their initial response. Some decried her rebellion against tradition; others worried that becoming a Christian meant that Carmen would never marry.

During one episode of family conflict, while hiding in the bathroom and hearing her mom raging outside, she recalled the verse in the Bible where Jesus commands His followers to “hate” even their family in comparison to Him. “When you say, ‘I am a follower of Jesus,’ you have to give up something as well,” Carmen realised.

After high school, Carmen’s friendship with the Indonesian woman had broadened her awareness of the difficult situation of ethnic minorities in Hong Kong, and she found out about a local short-term mission through a church brother involved with OM in Hong Kong. In this 11-day programme, she roamed the streets, conversing with Indonesian domestic workers and making home visits to Pakistani families.

“God really opened my eyes to see how these people in Hong Kong are my neighbours,” she says. “And God also cares about them physically and spiritually.”

She continued to volunteer with the programme for a year, until, in 2013, the end of her TB treatments allowed her to travel to Malaysia to join an international short-term missions trip. Carmen arrived in Malaysia in the month of Ramadan – the Muslim month of fasting – and hearing the adhan, the musical call to prayer, pierced her with a sense of how Jesus longed to show the Muslims His love.

It dawned on her that she had come all the way to Malaysia when Muslims in her own country desperately needed to know this love. After a day of fasting and prayer, she committed to join OM in Hong Kong full-time.

The two prongs of Carmen’s ministry occur every week on Wednesday and Friday. In the middle of the week, seven Pakistani students, ranging from primary to secondary school, come to the centre where she works to receive one-on-one tutoring from church volunteers, who help them prepare for exams and finish their homework. After the tutoring, Carmen gathers four Pakistani girls, ages 14 and 15, and huddles together with them to share about the highs and lows of their week. In a culture where the girls often gossip about each other, Carmen says she hopes to show them how to trust one another.

On Fridays, Carmen organises groups of three to four volunteers from churches and sends them to various Pakistani homes, where they help with the children’s homework and socialise with the parents.

Besides these weekly events, the centre also provides a variety of practical services for the Pakistani families, who often deal with poverty and low educational opportunities. According to the South China Morning Post, many of Hong Kong’s ethnic minorities, who make up eight per cent of the population, deal with “backdoor racism” when trying to open bank accounts, apply for schools or rent apartments. Of this disadvantaged group, the Pakistanis have it the worst: A 2016 government report detailed a poverty rate of 56.5 per cent for Pakistanis, the highest among Hong Kong’s minority ethnic groups.

At the centre, Carmen and the volunteers do what they can to help alleviate this situation: accompanying Pakistani women to their hospital check-ups, providing legal services to Pakistani youth and helping Pakistani families move to new apartments.

As a young, single woman, she particularly empathises with the Pakistani girls, some of whom she has stayed in contact with throughout her nine years serving this community, watching fourth-graders eventually bloom into teenagers. Using WhatsApp, she often texts back and forth with the girls, who see her as a confidant, and she also invites them to spend time with her, talking or making outings to the countryside.

Carmen was around the same age as these Pakistani girls when she first committed her future to Christ, and she continues to marvel at how God has used her since that moment.  Despite her sickness and resulting lack of higher education, she says, God has helped her find a ministry niche by revealing to her the gifts He has given, including a love for organising events and talking with people.

God can use anyone for His work, she explains – even a young woman with TB lying on a hospital bed. “Every one of us has a gift from God,” she says. “If you are open to let God use you, then you will find your gift.” 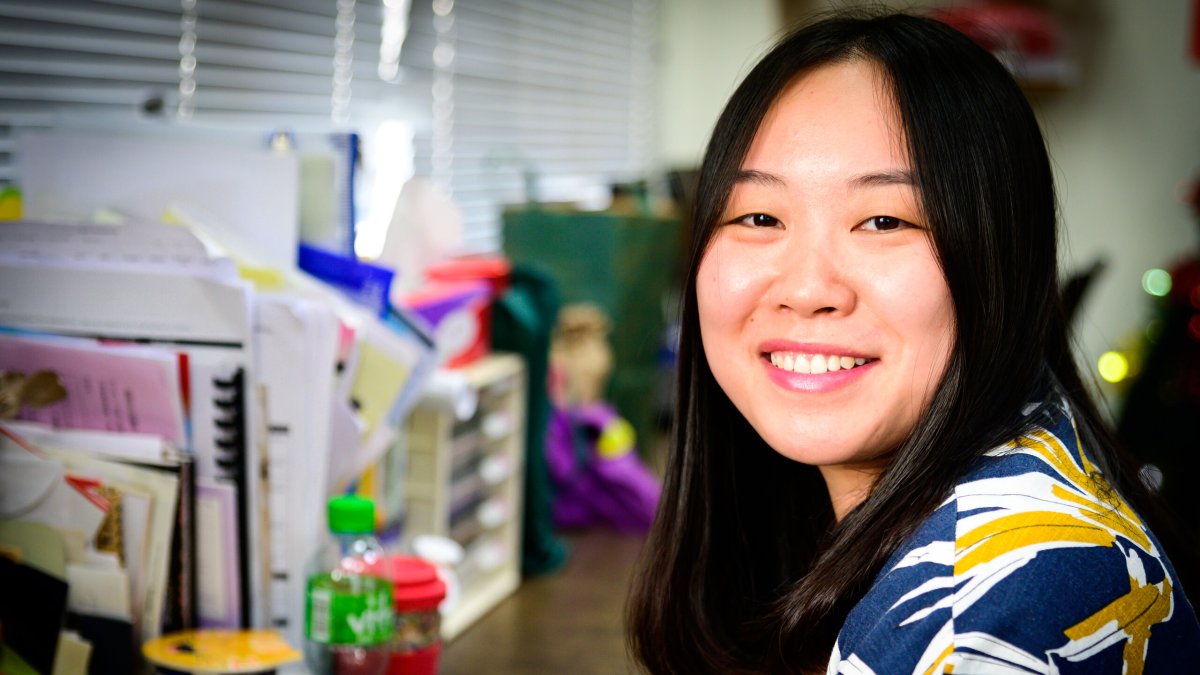 Staff worker at her desk.