"God's love is not just for me and my tiny community,” Pastor Philip shared, “but His love is for all people. He has widened our perspective to see the world as He sees it.”

It all started when his family changed their worship night to Fridays. Little did they imagine that opening their door to a neighbour would birth a church in a matter of weeks. Soon, both Pastor Philip and his wife Levy, prayerfully plunged into full-time ministry, quitting their jobs and focusing on shepherding their neighbours in the newly established home church.

Pastor Philip began to train and teach some of the young men in the congregation in his front yard. After a couple of years, he decided it was time for the students to use what they had learnt; they needed exposure to missions. Together, they boarded a plane and flew to a nearby island where Philip planned to leave the students and go on vacation with his wife.

But Pastor Philip couldn’t turn a blind eye to the needs around him. There in the mountains, his vacation plans vanished. Instead, he and Levy saw a clear need for Jesus’ love right in their own country.

They learnt about the many impoverished communities of precious tribal people, each with their own dialect and traditional beliefs aside from the country’s main religion of Roman Catholicism. God birthed a vision in Pastor Philip's heart during this time to start a training centre for local believers to reach their own tribes.

Returning home, Pastor Philip felt as if all his peace had left him. He couldn't get his mind off of the things he had experienced. He prayed, asking God for clarity. By faith, he left the house church in the congregants' hands, closed down his photography business and moved his family to the island that had captured their hearts three months earlier.

As Pastor Philip began to search for a plot for the training centre, he wrote down three non-negotiable criteria he wanted to find in the land.

Three days after their arrival, Pastor Philip met on the road the barangay captain (village government official) who had some land to sell. Pastor Philip knew this was the land God was giving them as every specific point he had jotted down was supplied.

Though he had the perfect land, Pastor Philip had no money for the down payment. ‘If God is in this, He will provide’ he thought. And provide God did. Just two days later, a friend gave him the exact amount needed.

Sowing in tears, reaping with joy

One of the greatest challenges for Pastor Philip has been seeing how following Jesus has required sacrifices that impact his family.

"I can bear the pain of being far away from what's familiar," Pastor Philip said, "but to see my family suffer because of my obedience to God is disheartening."

But even in those times of difficulty, God supplied in the lack, and now his oldest daughter wants to follow Jesus in missions.

"I am so glad that God answered our prayers for our kids to do even greater things for God than us! That was the moment I knew it is worth it all!" Pastor Philip shared.

Today Pastor Philip, Levy, their children and team have built up the training centre for tribal believers to learn how to farm and teach the Word of God. This equipping has enabled believers to bring these new skills back to their own tribes and communities. The first seven graduates, now pastors, are actively serving among their own people.

There’s a reason it’s a journey

Pastor Philip’s first understanding and encounter with God was in Sunday School. At the age of 12, the truth of God’s Word and love had taken root and, in the quietness of his room one day, young Philip invited Jesus to be his Saviour. That moment would set the course of his life as God began to prepare His son for the plans He had for him.

During high school, Philip experienced many inward insecurities which he dealt with by pouring his energy into pleasing others and developing his talents. And so Philip became one of the most popular guys at school as well as president of his church’s youth fellowship.

But before long, Philip felt suffocated. The demands of pleasing others began to show him the shallowness of his walk with Jesus. He led worship as people shouted and cheered, but he felt empty. Instead of speaking from his heart, Philip copied the worship lingo he heard on Christian albums. Philip finally came to the end of himself during his church's youth camp.

After one energetic time of worship, Philip was alone, much like he had been in the shelter of his bedroom at 12 years old. It was then that Philip dedicated his life to ministry and decided to go to Bible school.

A whole new world opened up to Philip as he studied God's heart through His Word and ministered to youth who struggled with the same insecurities he had encountered. God used past struggles to bring insight and healing to teens. But this was just the beginning.

Philip married Levy, and the couple started to build a life together. The next few years were full of teaching, building a successful photography business, serving a missionary through tech support and being involved in church. Then God opened Philip and his family’s eyes to the needs directly around them and gradually led them to the island where they now live sharing Christ’s love and helping others do the same.

With continued vision and passion, Pastor Philip runs the race set before him.

“God can call anyone,” Pastor Philip said, “but He has chosen to call you to journey with Him in blessing the world. Now is the time to say: ‘yes!’”

During this time of the new coronavirus, Pastor Philip and his team have been farming on a larger scale in order to give produce to those who are in need. Visits to the tribal villages have been stopped due to the government-issued lockdown, but by God’s grace, they were able to hold a farming training before the lockdown and distribute seeds to the participants.

Please pray that God will grant wisdom and guidance for the after-effects of this pandemic. Pastor Philip says there are a lot of things on their calendar they will need to wisely navigate through during these trying times. 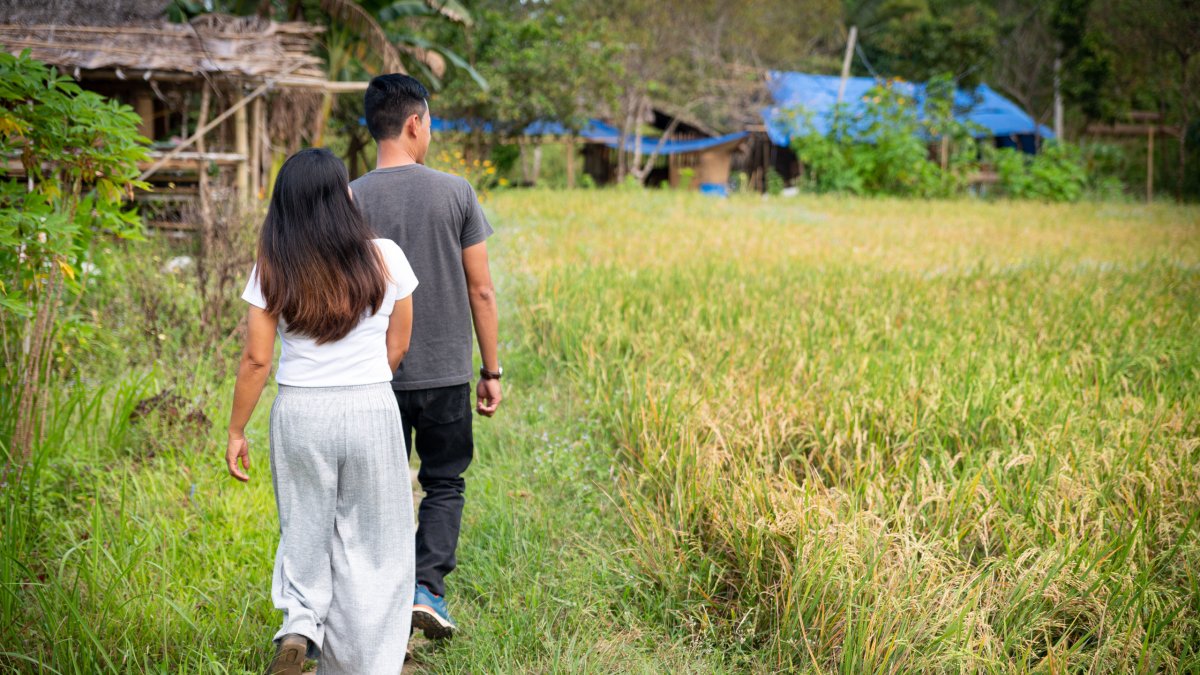 Portrait of Philip and Levy Lim who lead the ministry in Palawan walking through the farm. Photo by Alex Coleman.