Created and prepared for good works

Lenka* jumped up and down, almost running on the spot. Each step emphasised her excitement, eyes wide as she envisioned possibilities for a new cover design. This time the Albanian edition of The Way of the Shepherd, an insightful guide on leadership, sparked her imagination. “I’m going to draw sheep, and try out different styles!” Lenka happily spilled out her ideas to other graphic designers.

Motivated by the chance to develop skills in graphic design and create literature to present the gospel, Lenka joined OM’s EurAsia Support Team (OM EAST) for two and half years. With gained expertise and new direction, she recently followed God’s leading to OM South Africa. Lenka reflects on how God used her time with OM EAST’s publishing ministry to reach people throughout Eurasia, meanwhile changing her heart towards her own country, Slovakia.

“When I was looking at different places in the world where OM works, I thought, I’m 100 percent sure I will never do anything in Eastern Europe,” Lenka admitted, laughing. “But then I met people on this team whose perspective changed mine.”

Lenka grew up in post-Communist Czechoslovakia, one of the areas where OM EAST (formerly OM Greater Europe) smuggled Bibles 25 years earlier. Robert*, still on the team, was moved to tears as he considered the significance of someone from a former Communist country joining their ministry. Memories fresh in his mind, Robert told Lenka of police tailing his van in the dark on one smuggling trip in Czechoslovakia, adrenaline pumping as they narrowly evaded being caught.

“Hearing about people risking their lives to share Christ in your nation, makes you realise your nation is important and that you are important because somebody values it that much,” Lenka said. “It’s beautiful.”

OM EAST communicates this same message and value today by producing Christian print and digital media for people groups in Eurasia who still have few resources in their language. Designing publications and flyers in over 15 languages with thousands of copies published, Lenka leaves a legacy that will continue to impact lives for years to come.

“I have seen how women really wanted to read the literature,” Lenka enthused, recalling an outreach to offer hope to vulnerable Czech and Slovak women. “I’ve seen them read it and then approach me to ask questions; it was great to see it hitting a nerve and getting to the core.”

Serving in Ghana during her first year with OM, Lenka discovered a desire to support missions through high quality graphic design. Despite schooling in Art and an aptitude to quickly grasp the technical aspect of design, Lenka struggled with low confidence because she lacked a formal university qualification. However, following training to transfer her artistic abilities into digital form and taking encouragement from scripture, she overcame these doubts.

“A verse in Acts four really spoke to me where it says, ‘when they saw the courage of Peter and John and realised that they were unschooled, ordinary men, they were astonished and they took note that these men had been with Jesus,’” Lenka explained. “I think that transformation has happened [in my life].” Creative former classmates express their amazement at how Lenka is able to do what she loves and notice her joy. “It’s because of God,” she tells them. “I didn’t plan this road.”

Lenka’s journey of faith began with meeting missionaries in Slovakia, later putting her trust in Christ at a church camp. Over the past two years, Lenka has increasingly learned to say “yes” to God and look to Him as new challenges arise. Amidst sketching sheep or jotting inspiration on an array of yellow post-it notes, prayer is key in her design process. “I can only do what God lets me do,” Lenka acknowledges. “It’s not just Him pouring into my abilities, but also ideas.”

Spurred by the need to share the Gospel through media, Lenka encourages believers to use this gift to strengthen small churches or reach minority groups in Eurasia and beyond.

“If you want to see the world changed, start doing something,” Lenka concluded, urging others. “If [graphic design] is what you can do, do it!”

Please pray individuals would respond to the truths they read about and, like Lenka, discover their God-given gifts and choose His plan for their lives.

Could you use your skills in graphic design to support local ministries and help present the Gospel throughout Eurasia? View opportunities: OM EurAsia Support Team. 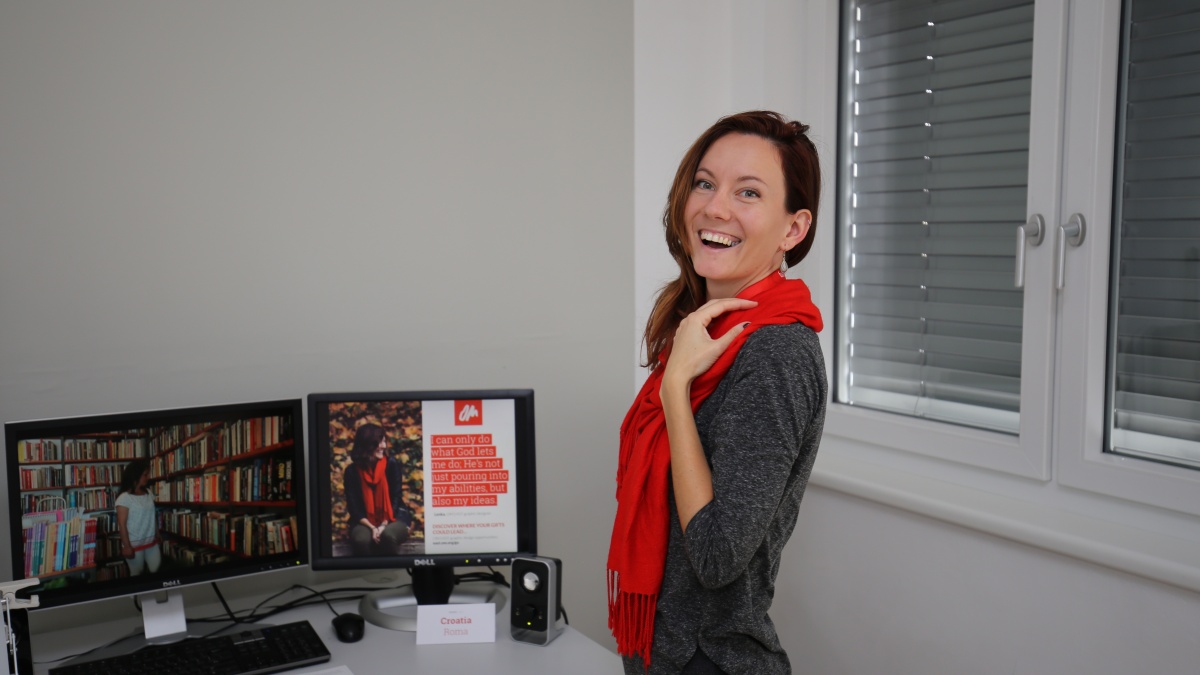