The reason to stay

A woman called out a greeting when she spotted OM worker Jana* in a street of run-down apartment blocks in Georgia’s capital, Tbilisi. The two ladies seemed to share a joke. “She always laughs when she sees I’m still here,” Jana commented to an OM EAST worker on their visit to the city. “She cannot understand what I am doing in Georgia as my husband is Western and I could leave.”

Jana and her husband live in a remote mountain settlement of Georgia, in a place where there are no shops, no doctors and no known believers.

“I feel a black cloud or something dark that stops hearts or minds from receiving God’s Word,” Jana expressed, describing the challenges of telling villagers about Jesus.

Jana translates Christian literature into the Georgian language and teaches English in the local school. Once she showed her pupils an evangelistic comic she had worked on. The following evening a man appeared at their house, holding a knife. “You can teach at school but you can’t touch this subject,” he threatened.

“They fear leaving their traditions,” Jana explained. “They are afraid something bad will happen to them if they go against their customs.” Although Orthodox Christianity is the state religion, most people have never read the Bible for themselves and there are few evangelical publications available in their language. Therefore, many struggle to distinguish between faith and tradition or superstition.

While those she knows would move to Europe for economic reasons, if they could, the spiritual need convinces Jana to stay. It motivates her to point seekers to scripture and provide literature communicating God’s truth with clarity. Over the past decade she has completed more than 20 titles, with 50,000 copies printed by OM EAST.

As a young adult, Jana came to faith during Communist rule, when churches were closed and schools declared that God does not exist. Against her parents’ wishes, she met followers of Christ in someone’s home. Since police monitored attendance, believers subsequently faced discrimination and rejection in communities.

“My father told me, ‘if you go [to the meetings], then don’t come home again,’” Jana uttered with tears in her eyes. “I left at 18 and rarely saw my parents until around nine years ago,” she continued, now in her forties. “It’s difficult to remember that time.”

A short-term OM outreach 15 years ago stirred a desire to serve in missions. “I found my heart there,” said Jana, who joined OM three years later. “I wanted to visit people, share the gospel in the street and encourage churches.”  Now a key Christian translator in her country, Jana loves distributing resources in the city and beyond.

“The arrival of every Christian book in Georgian is a great celebration because there are still so few,” Jana’s husband stated. “They are hungrily received by believers and evangelistic copies are passed to those who don’t yet know Jesus.”

In a letter, local believer Davit* expressed his response to reading testimonies of those who sacrificed their lives for Christ. It challenged him to offer his life as they did, even if it means losing his job, family member or facing torture. “I was always afraid of what the Lord might ask me to give up,” he wrote. “This book helped me decide to give my life and everything in it to Him.”

Regular feedback encourages Jana to do more, knowing that each translation will have a positive impact. However, when moving to the mountains five years ago, she had planned to pass her job on to someone else but could not find the right person. “After a while, I realised why; God was providing me with spiritual food even here and preparing me to teach others [about faith],” she reflected. “So when others say the books influenced their lives - I am one of them as well.”

Jana dreams of a little shop or library and café in Tbilisi where all the publications can be accessed in one place. She hopes for more workers to distribute literature and longs for OM’s ministry to grow.

“I want Georgians to experience what I have experienced,” said Jana. “To understand that God is very big and not limited,” she emphasised. “To grow through situations such as being alone or in circumstances, which bring you close to Him; to find He gives you experiences you never could have imagined nor do without Him– this is the wealth that makes us rich!”

Please pray individuals in the capital and mountain village will receive Christ in their hearts and minds. Please pray for wisdom as Jana furthers Georgia’s collection of evangelistic and discipleship materials.

Inger R. loves to give people a voice by sharing their stories as she writes for OM’s EurAsia Support Team (OM EAST). OM EAST’s literature and media ministry produces high quality print and digital media in over 25 languages. Always working with local partners, they seek to share the gospel, strengthen churches and bring hope to people groups throughout Eurasia. 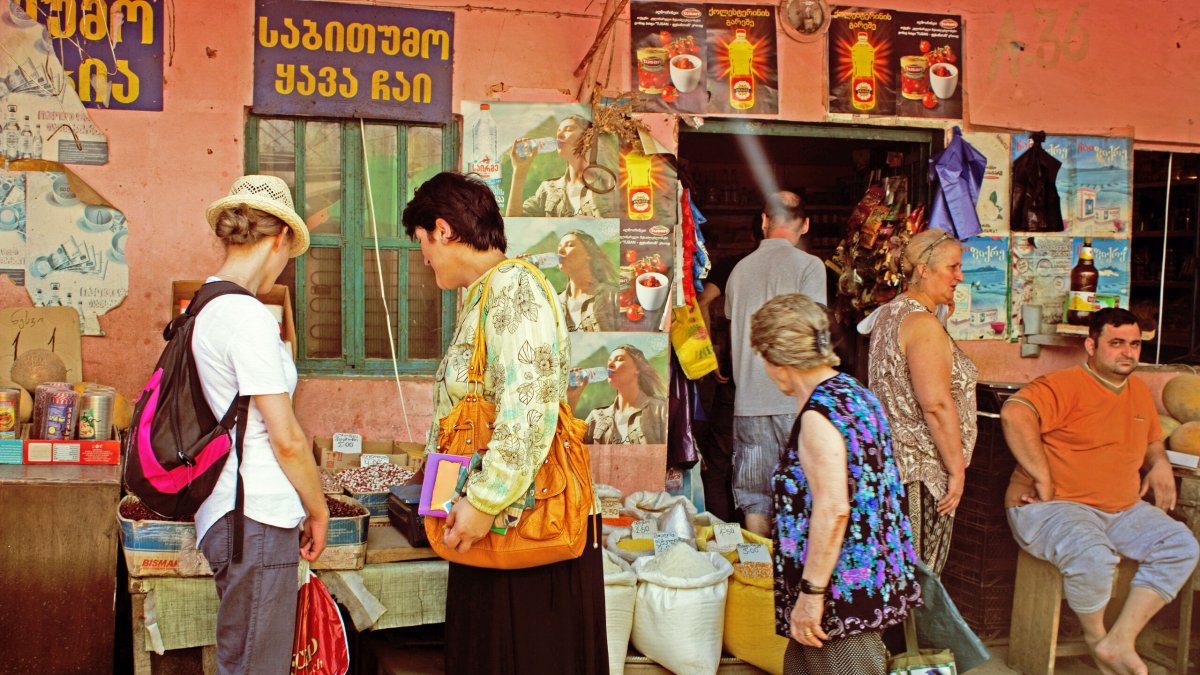 International: OM EAST: Browsing and weaving through a market in Tbilisi, Georgia, OM workers seek to chat with locals and offer gifts of media, which share the Gospel.