Blessed are the peacemakers

In South Sudan, shaking hands with someone from another tribe is a monumental gesture of peace. Internally divided since it gained independence from the north in 2011, the world’s youngest country, including its capital, Juba, is geographically segregated by tribe; even inside the confines of the capital, subdivisions (as well as some churches) consist of single tribal groups. Ongoing tribal tensions have contributed to government instability and often escalated into armed conflict among the country’s 10.2 million people.

Instead of accepting this tribal segregation, local OM team members are working for peace. In 2018, they organised a seven-day youth conference that brought together 140 young people, aged 20 and above, from multiple different tribes. As the young people spent time together learning, playing sports, worshipping, praying, sharing and reaching out, they established personal cross-cultural connections, experienced forgiveness and created a new future for their generation. “These young people will not see themselves in the tribes; they will see they are Christian,” shared OM team member Elia. Instead of letting their tribal history dictate their behaviour, the youth at the conference learnt to embrace their identity in Christ and their role in bringing peace.

One young man flew in on a UN flight. Because of the violent conflict between his tribe and another prominent tribe, he had been forced to live within the confines of a UN compound for the past five years, along with around 20,000 people from his tribe. But he wanted to attend the OM conference and share his story. When the topic of reconciliation came up, the young man started personally greeting participants from different tribes. Other youth, from opposing tribes, took pictures together, hugging each other. “From this conference, they are coming to the conclusion that they can come together,” Elia recounted.

The woman who cooked for the youth conference also worked toward a new future for the country. “I have known her for a long time, since when we [were] in Khartoum” (before Sudan and South Sudan split), Elia said. The woman grew up in a Muslim family, without the opportunity to experience God’s love, until she attended an OM conference and heard life-changing good news.

Because the woman learnt about Jesus and gained courage to announce her faith in Christ—despite being the only believer in her family—she decided she needed to give back in whatever way she could. “She’s not well-educated; the only thing she can do is cook,” Elia described.

So for every OM gathering since 1991, the woman has volunteered to go to the market, gather all the food and cook big meals so that others could find the same hope she did. “I’m very happy that I’m contributing to the same ministry that opened my eyes to Christianity,” she told Elia. “If OM conferences [made] me know Christ, there are many people like me, looking for a platform to openly share their faith.” Her willingness to serve, without pay, to make sure the next generation knows Jesus, encourages Elia to keep looking for ways to share the good news and bring peace.

The young people of South Sudan aged 25 and under represent over 60 per cent of the total population*. A powerful majority, they will undoubtedly shape the country’s future, and they are ready to engage now. “They are energetic. They are looking for someone to stand with them, equip them, train them and send them,” explained Elia.

South Sudan has faced tribal warfare and power struggles since its establishment, but it does have abundant natural resources, including oil, and sits strategically as a gateway to Africa. Recently, Elia has watched Islamic organisations buy land and fund scholarships for some South Sudanese to study in the Arabian Peninsula. English is the official language, but the continued widespread use of Arabic, the language of the Qur’an, could make South Sudan an attractive base for the islamisation of Africa, Elia suggested. Young people need to be engaged in shaping their country’s future, or “any movement will come and take them,” he cautioned.

Instead, OM wants to take every opportunity to introduce the youth to Jesus and encourage them to share with others how to have a personal relationship with God. “Let us start to focus [on] the young people — equipping them, giving them knowledge about Islam and how to reach Muslims, giving them the idea of the vision, giving the idea of cross-culture, so that it will be easy for them to reach the other groups,” he explained.

The city of Juba has seven main roads, each leading to an international border. As OM plans for the 2019 youth conference, they want to send seven teams on outreach after a time of training. Already in 2018, many of the young people travelled down one of the roads, meeting people, asking questions and preparing the way for the gospel.

At the end of 2018, the UNHCR reported 1.8 million internally displaced people in South Sudan. For the past year, OM’s team members in South Sudan have partnered with other believers to reach out to the villages and communities of displaced people surrounding Juba. They have met people who have experienced violence, suffered major injuries and illness with no medical treatment and lost their entire families. Water pollution and inadequate supplies of potable water continue to be issues across the country, and people are at high risk of infectious diseases like malaria, rabies and meningitis*.

Youth conferences are aimed at developing the next generation. However, monthly relief outreaches help the neediest people: the elderly, the widows and the orphans. The teams spend four days among each group of displaced people, assessing needs, listening to stories, preaching the gospel, training people to study the Bible together in small groups and providing limited medical care when possible.

The team served one displaced woman, whose husband was jailed after enquiring when he would receive his wages. Since she worked at the same office, she stopped working after her husband’s imprisonment. Later, seven months pregnant, she reported that her children had stopped attending school. She prayed that God would intervene in her situation. When the volunteers offered her a relief packet, she responded: “Your provisions of these food items have given me strength, faith and hope to tell the truth of my story.”

Another person, whose family members were killed during the tribal conflict in 2016, had been planning revenge. But after listening to the OM team share and praying, he said: “I want to confess and forgive those who killed my family members…I now have peace in my heart.”

A third displaced person, who approached the outreach team to receive food, admitted that she had previously been a believer but had stopped attending church two years earlier. The relief packet and the volunteers’ compassion helped restore her relationship with God. She said: “I received blessing, got my faith back, and I learnt to thank God in all situations because His plans and ways are not ours. I had planned for food, but God planned for my soul.”

Between conferences and outreaches, the OM team runs Apaya Bookshop in Juba. “The bookshop is the centre of our ministry…All of our ministries depend on the bookshop,” OM team member Tony said. In fact, the bookshop supplies Scripture for all of South Sudan and neighbouring countries. In past years, the team have donated Bibles to the Bible Society, pastors, churches and other non-governmental organisations. They also set up book tables on university campuses and in public markets as well as hosted events at Easter and Christmas. Since its inception, students have tended to spend time in the bookshop, along with other curious visitors wanting to know about the difference between Muslims and Christians.

Nonetheless, OM has depended on ongoing donations to stock their shelves, and demand is higher than supply. When the books run out, activity dwindles. “When there’s not books, there’s not people coming or asking [questions],” Tony explained.

In 2018, George Verwer, OM’s founder, sent 300 Bibles to the bookshop. The entire stock sold out in one week. Another OM worker, who visited South Sudan in 2018, brought four suitcases full of Arabic Bibles. Those, too, ran out within a few days.

In early 2019, the team received a new shipping container full of books, Bibles, water purifiers and mosquito nets — a gift nearly a decade in the making, as the last shipping container had arrived in 2009. “For us, this container is a big relief for us…It is giving us another momentum of go ahead,” Elia said.

Not only will the new books bring life—and visitors—back to the bookshop, the sale of stock will provide needed rent money and income for the team member who oversees the shop. The team plans to distribute the water filters and mosquito nets to internally displaced people during their monthly outreaches. They also expect believers from nearby nations and refugee camps to come and take literature to distribute throughout the region.

“Indeed, God has answered our prayers. For the last ten years, we never received Bibles and Christian literature in such a big quantity,” Elia wrote after the container arrived. “What a blessing to OM in South Sudan.”

Pray that the youth in South Sudan would receive sound education and biblical training so that they will be prepared for future ministry. Pray for the families of OM workers, who have experienced suffering and need perseverance. Pray that the container of books and supplies would bless ministry in Juba and beyond. Pray for the peace of South Sudan. 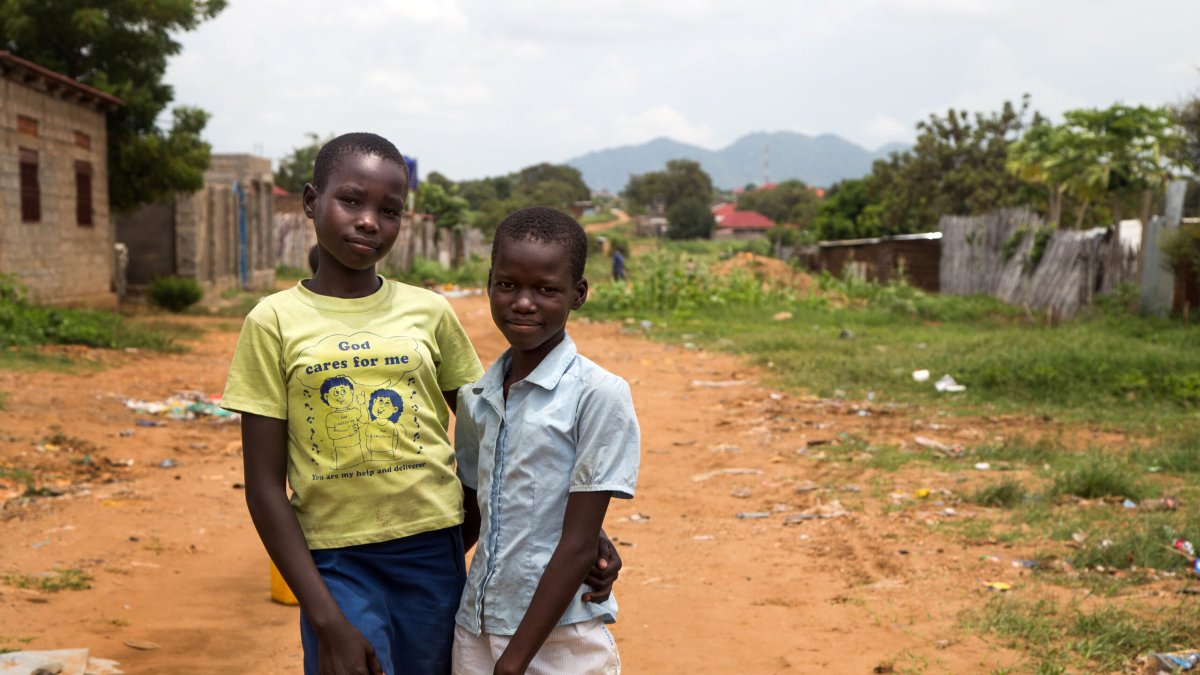