As Logos Hope concludes her visit to Colombia in support of Operation Mobilisation’s pioneering initiative to inspire Latinos into mission, Associate Area Leader for OM’s resourcing throughout Latin America, Julie Paniagua (Costa Rica), reflects on how the bold partnership is working out so far.

“It has far exceeded our expectations,” says Julie. “The ship’s visit to Colombia has been the ‘guinea pig’: the first country in the region Logos Hope will spend the coming two years touring. So we’ve been testing out new mobilising events, new strategic partnerships, new aspects to the Visitor Experience Deck on board – as we introduce this new vision that Latinos are uniquely suited to connect with least-reached people who haven’t heard the gospel.

“We have been figuring out how Logos Hope and OM Latin America (LAM) can, in a sense, dance well together – how we become ‘we’ as we work in unison. Not forgetting that every crewmember is getting used to a new culture and language. That’s huge. But after our first three port calls and ten weeks in this country, I can say that Colombia has truly proved to be the launchpad we were praying and hoping for.”

Julie reveals that the team from OM Colombia will disembark Logos Hope with 2,000 responses to follow up on: local Christians who’ve expressed a genuine interest in exploring how they can serve God in a least-reached part of the world.

“In terms of numbers of people burdened for prayer, signing up to start giving, and to get information about going into mission – all of it just blew our expectations,” she says.

“Logos Hope being here has created the opportunity for us to get involved with strategic churches that it would have taken a lot longer to build relationships with individually. It’s exciting to see their response in terms of wanting to be a key part of sending out members of their church. They are eager to learn how they can support missionaries in prayer, care and finances.”

Julie continues, “One pastor told us he realised that it was selfish to be investing the church’s resources inward. He said, ‘We need to grab hold of this money and send it outward!’"

“We presented the idea that on one Sunday a month, if every member of a church could give just one dollar to support mission, that would amount to $4,000 USD a month; which is close to $50,000 USD a year," explained Julie. "The response we got was, ‘Oh – that’s totally possible.’ But if we’d gone up to the pastor and said, ‘Could you give $50,000 USD a year?’ they’d have said, ‘No, we don’t have money for that.’ So this way of thinking shows that it is within the realm of possibility for the Latin American Church to join the effort. It’s been a joy seeing Colombian Christians realise this is a way they can honour the Lord and be a vital part of His kingdom work.”

OM Colombia and 12 other OM fields across the continent have refocussed their ministry on inviting, training and sending Latinos to serve in key regions of the world – in line with OM’s global purpose to see vibrant communities of Jesus followers among the least reached.

With Logos Hope bringing her neutral platform to attract and connect with visitors and mobilise the Church, plus the example of an international crew who have left their countries to serve God overseas, the coming years will see a collaboration between the Ship Ministry and OM’s land operations on a scale that hasn’t been seen before.

“That old proverb of going fast alone, but going further together is true for this partnership,” says Julie. "With trying to merge teams and all the adjustments needed on both sides, it can feel slower – but as a result, we’ll be able to make even greater kingdom impact among the least reached. It’s like iron sharpening iron, as we each bring our strengths and the experience God has given us to accomplish so much more, together.”

Julie and her husband Alex Paniagua moved their family to live on board Logos Hope for 2018 – ensuring that OM’s Latin American leadership can oversee each of the fields as the ship spends time in that country.

Key to the process of building the capacity of the region’s smaller OM fields to ride the wave of interest stirred up by the ship, is plugging in to other organisations. Julie explains: “We are coming alongside fields and empowering them to grow their databases, plan follow-up conferences and training, and put the right people and structure in place to work towards sending 2,000 Latinos into mission in the coming decade. We’ve formed strategic partnerships with people like Crown Financial; to teach the theory of giving and its biblical foundation, and with COMIBAM International – which is an umbrella for more than 600 mission agencies. We realise that God has equipped each of us for a specific purpose, and in some things, we can achieve a greater reach and impact if we join forces and share skills.”

It’s not all been plain sailing, Julie acknowledges, and she is excited about the room for growth ahead. “In each port, we’ll learn more about what works and what doesn’t, and we’ll get better at inviting Latinos to consider this call. God willing, we’ll have it down pat by the time we reach Brazil in 2019!"

“People have walked through this quite gracefully in the midst of confusion and there are great attitudes,” Julie concludes. “It continues to be a learning curve – so let’s keep having the hard conversations, because we want to get there. We want this partnership between the Ship Ministry and OM Latin America to work well, because it’s so worth it: it’s worth it because of what God works out in our own hearts, and because of the influence and impact it will have on what we have been called to do.” 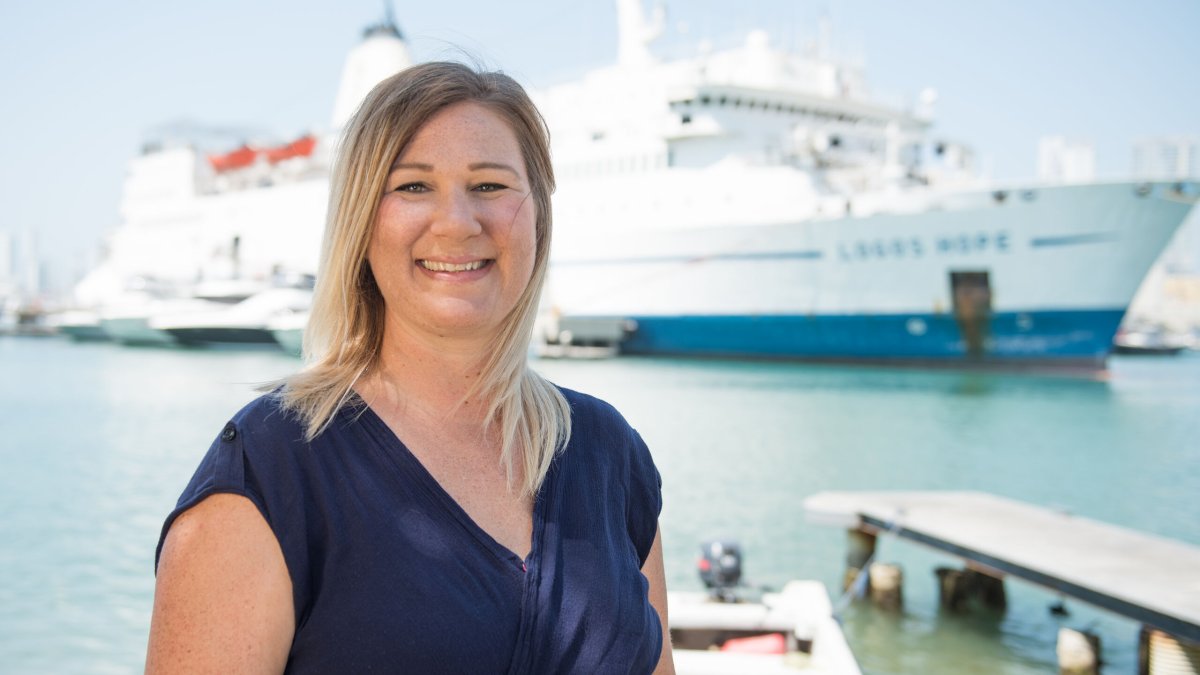