'We had to leave'

Between 25 August and 29 October, an estimated 607,000 people from Rakhine State in Myanmar have crossed the border into Cox’s Bazar, Bangladesh, and every day more make the journey. The UNHCR has declared this influx of refugees to be “the world’s fastest growing refugee crisis and a major humanitarian emergency.”

OM has an established partnership team on the ground in Bangladesh to assess the situation and learn how OM can best make a difference. OM writer Ellyn Schellenberg visited the refugee camps to hear the stories of those arriving and staying there.

Tents are everywhere. Layer upon layer of blue and orange plastic tarpaulin cover almost every inch of the rising and falling hills in the area outside of Cox’s Bazar. Small footpaths cut through the tents, allowing enough space for only one person at a time to pass through. The mud paths are slick where water has sloshed out of buckets that children use to carry water from the nearest pump. In some places, the trees are the only thing preventing more tents from being built, and even these are being stripped of their bark and cut down for firewood.

Faces of women peer out of the shadows beneath the tents made from bamboo posts and tarpaulin. Many are holding babies, most lying motionless, weakened by malnutrition brought on by days or even weeks of walking. Their small, naked bodies are listless in the sweltering heat, and their once beautiful brown skin is now an awful shade of blanched, unnatural pink.

Large families squeeze into the few square metres of space in their tents, with only one flap opening and no ventilation. The fire for cooking kicks up smoke and even more heat. The air is thick with humidity, and only an occasional breeze brings any relief.

Children are everywhere: running along the small paths, crouching in shadows, playing with plastic bottles and wood, running along the main road too close to busy traffic. And like children everywhere, they play, finding new games and new things to entertain them. Except, I notice that their tears seem to come a little faster when they fall, their angry fists fly a little sooner, and for some, the horror of recent trauma casts a shadow in their eyes.

As I walk through the camp I make eye contact with those I see to offer a smile. I hope a few of them might share their story with me, and I share a word of encouragement with them, however trivial it seems in relation to what they’ve been through. I’m amazed at the number of people who smile back at me and invite me in to talk.

Stories of loss, pain and grief

One young man and his family standing in their tent opened up to me about their plight. “They have killed our children, raped our mothers and burnt our villages,” Jarbair, 24, told me. “We could not protect them. We could not save them. So, we had to leave.”

Jarbair was a student in his first year at university, studying geography to be a teacher, before he and his family fled Myanmar. For the past two months, they have been in the refugee camp, unable to leave or find work.

The stories he tells are almost too much to bear. “I watched them capture children and burn them,” he said. “They formed a circle around the village and approached it, capturing people as they fled.” When he and his family escaped, he saw holes in the ground that had been dug by a digger and filled with bodies.

In another conversation, Dineh, 70, tells an equally tragic story. “My son was in a mosque when the military arrived,” he recalled. “He tried to flee, but they shot him and he died on the street. We did not get to bring him home and bury him. He was put in a mass grave with many others.”

Dineh’s other son, listening to our conversation, added, “Everywhere was the bad smell of death. There were so many dead bodies.” The family fled and hid in the jungle between their village and the Bangladesh border for almost 10 days. They were only reunited in the refugee camp after a month. Before fleeing, Dineh had fished and farmed his small field to feed his family. Now he and his sons sit idle in the camp.

I hear another similar story of the military rounding up men in a village. They took those over the age of 18 to a building, tied them up and killed them. Those who could, fled into the surrounding jungle. “I saw dead mothers and their children along the way,” said Jubayda, a mother of three. “We saw with our own eyes that the military was killing people. And we were afraid.” After her village was burnt by missiles, and many others were killed, she fled with her children, not knowing if her husband was alive.

Another mother of eight, Kurshida, shared, “We carried our children, sometimes on our backs, sometimes in our shawls; sometimes [we had] many children together. We tied them to ourselves and carried them.” For 15 days and nights, Kurshida and a large group travelled through the jungle towards the Bangladesh border. For some, the journey became too much. “I saw a woman unable to carry her children, so she set them down in the jungle and left them behind,” Kurshida said.

Each person I speak to in the camp tells a story of loss, pain and grief, and I imagine that each of the 607,000 Rohingya who have fled for their lives feels similar fear, anxiety and uncertainty. There are no easy answers to the questions of whether they will ever be able to return home, be reunited with their missing family members, attend school again or find another job. But in the midst of so much suffering, one truth remains: They deserve to hear that they are loved and that they matter.

To this end, OM plans to create several safe spaces in the camps for children, where they can play and process the trauma in a protected area, and where their parents can engage in conversations with trained debriefing staff. Clearly traumatised children and parents, identified by staff, will be referred for further Critical Incident Stress Debriefs. These safe spaces also give staff the opportunity to identify further risks in the community, such as sexual violence, malnutrition and illnesses. Through early identification of these problems, those most prone can be advocated for by using a network established with other disaster response organisations.

In addition, OM’s partner plans to provide a safe washing area for women and children to bathe, education about good hygiene and sanitation practises, and non-food items such as kitchen utilities, hygiene packs and mosquito nets. Currently, the existing showers are used mostly by men, and the conservatively clad women avoid them. The camps are so large that neighbours don’t know or trust each other. It will take time and the help of organised activities to establish a new sense of community.

Please pray for healing for these Rohingya families and others like them in the camps in Cox’s Bazar. For more information, or to give to the relief effort, contact your local OM office.

Ellyn Schellenberg grew up as an American overseas in Europe and has continued to pursue her love for travel, writing and photography. She is passionate about using her skills to capture stories of what God is doing in Asia. 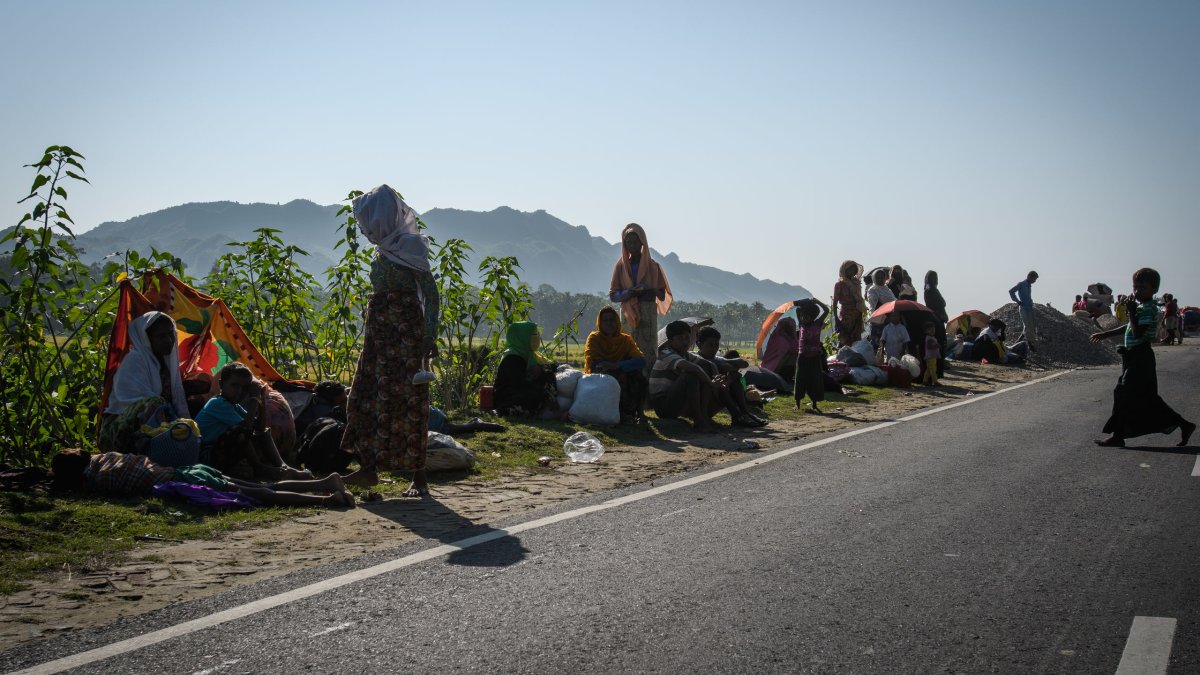 A Rohingya refugees sit on the side of the road awaiting a ride, after arriving on the shores of Bangladesh earlier that morning. Photo by Garrett N 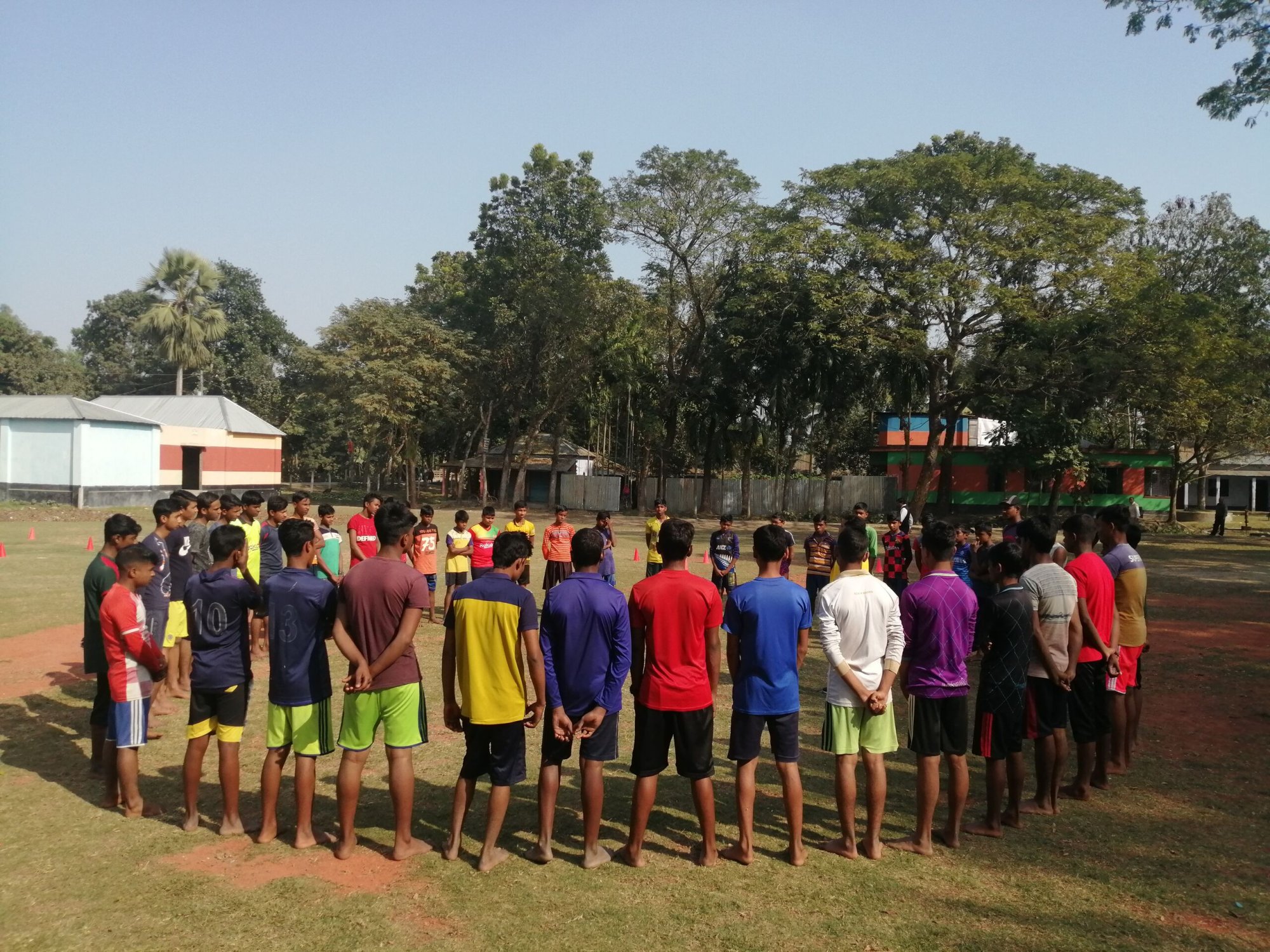 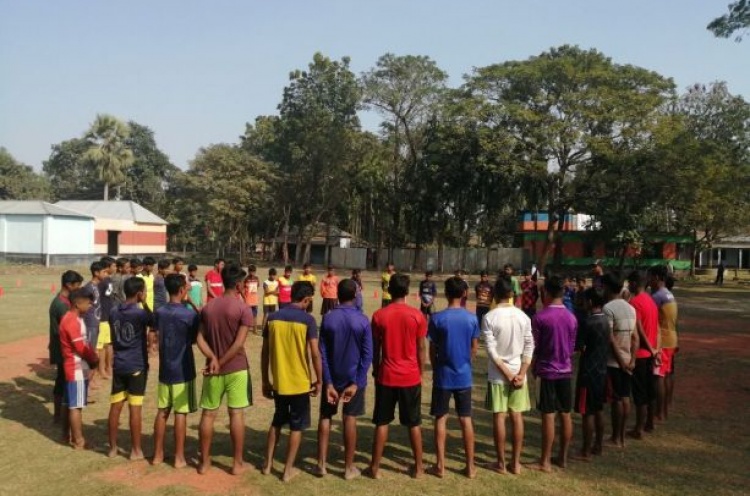