One of George Barathan’s earliest memories is going to the Hindu temple with his mother. “We did the normal rituals by taking fruits and flowers and giving them to the Hindu priests,” said George. “I remember doing that quite often.”

Born and raised in Sri Lanka, George was the only child born to his devout Hindu mother and father from a Christian background. His father was rarely home, and his parents did not have a happy marriage and later split up. “That really affected me, and I sympathised with my mother a lot. …She would tell me: ‘Don’t trust those Christians,’ I think, because of the experience she had with my father,” he recalled.

Despite his mother’s warning, George saw the love of Christ through the lives of a few others throughout his childhood. The first was an older woman who looked after him when he visited his father. She fed George and read him Bible stories about Moses parting the Red Sea, the battle of David and Goliath, and Samuel’s calling as a boy. “These stories made an impression on me, and I think much more than that, was this old grandma. She loved me and cared for me and fed me each mealtime; it touched me so much,” George shared. But his heart was with his mother, and he felt that he could not abandon her.

When George was nine, he started attending boarding school, where he met a missions worker from England. Hearing that George was a Hindu, the Jesus follower shared a story about a Hindu man from India, Sandu Sundar Singh, who came to know the Lord and later served God in Tibet, walking barefoot through the mountain villages. The story stuck with George, and he continued to talk with the Englishman who shared Scripture with him such as Revelations 3:20: "Here I am! I stand at the door and knock. If anyone hears my voice and opens the door, I will come in and eat with that person, and they with me" (NIV). After hearing the verse, George began to quietly wonder about Jesus.

Time passed and George decided to find work as an apprentice as he struggled to finish high school and decide what he believed. “In Sri Lanka, many people believe that all religions lead to one god eventually. And maybe that kind of was in my mind: no matter if you’re a Buddhist, Hindu or Christian or Muslim, eventually you come to a god,” said George. Looking through the newspaper for jobs, he spotted a little advertisement for a Christian rally put on by Youth for Christ one day. “I just decided to go—I don’t know what led me to that meeting,” he admitted. It was free of charge, promised live music and “I was just curious what those Christians were trying to say.”

Walking into the meeting, George was immediately welcomed by the believers. He saw the Jesus followers’ smiling faces and knew that “they had something that I did not have,” said George. The message of Christ’s sacrifice on the cross touched George deeply. He attended a church service where Youth for Christ was again speaking, and George knew that knowing Jesus was what had been missing in his life. “I was so desperate to start afresh, a new life where the past was forgiven …but I was fearful of what my mother would say because she didn’t like Christians at all,” shared George.

Talking with the speaker after the service, George gave his life to Christ. Youth for Christ came alongside him and helped disciple him, teaching him how to do a quiet time and grow in his faith. “I just saw how they lived, and I saw hey, these guys really mean business. Actions speak louder than words, and they were really true to their faith and lived according to the Bible, and that impressed me so much,” George said. George continued to take small steps in his faith, and as a result, his life began to change. His mother witnessed the differences and gradually accepted her son’s decision. “I was so close to my mother, and I didn’t want to hurt or disappoint,” remembered George. “To not go to the temple was a big blow for her and for me as well. But God began to give grace to both of us.

Taking to the sea

Two years later, in 1972, OM’s ship, Logos, arrived in Sri Lanka. George took two weeks off work and volunteered on board the vessel. “I saw these people going out every day, preaching the gospel on the street corners and in marketplaces and giving out tracts. I thought: wow, these guys are really courageous to do this in my country where Buddhism is a stronghold,” George said. “I saw them preaching boldly and bringing people to Christ, and I wanted to be part of the ship, part of the team taking the gospel.” This was a big decision as George had been offered a five-year scholarship to go to England. He turned it down and boarded the ship.

At the time, travelling abroad was seen as a significant achievement in Sri Lanka. But the fact that George was going as a volunteer without a salary—though OK with him—was a cause of shame to his parents. For the first six months he completed an intensive training programme which included washing dishes, cleaning toilets, unloading containers of books and so on. “I never expected to do those tasks, but God taught me to be flexible and adaptable and to do those things, and I’m glad for those experiences; they made me a better person,” George shared.

From working in the engine room to being the personnel manager to organising the lineup for the ship’s arrival, George served with the ship ministry for the next 25 years and as a ‘gopher’ (like a personal assistant, but very intentionally mentored) to OM founder George Verwer for one year. On another OM ship, Doulos, George met his wife, Janet (Singapore). They married in 1980, and moved to Canada in 1984. From 2005 to 2012, they lived in Singapore, serving as the country leaders and later promoting the work being done among the Dalits in India before returning to Canada.

Caring for the orphans and widows

On an exploratory trip to Sri Lanka in 2017, local Christian leaders pointed out the need for people to reach out to the war widows living in the north. Due to the past civil war, there are around 40,000 widows and their families in the rural northern part of the country. They mainly belong to the Tamils, a primarily Hindu people group, and have their own distinct culture and language. “Many of them have never heard the gospel,” explained George. “They’re not valued.”

Remembering how God emphasised caring for the widows and orphans in the Bible, George desired to be a voice for them and help bring hope, dignity and a sense of value to those who have suffered so much, trusting that they would one day know Jesus as their Saviour.

Since then, George and his wife have travelled twice a year to Sri Lanka to partner with local churches and believers to share the love of Christ among the war widows. The projects they do are spurred from asking the women what they need and what will improve their quality of life. Sometimes that means drilling a tube well for clean drinking water. Other times it means fixing a roof or providing a sewing machine to start a business. In addition to physical needs, spiritual needs are also addressed. When visiting the women’s homes, George and his wife offer prayer, encouragement and a chance to share about their lives.

Inspired by the work, local churches have been eager to help, saying they had not realised that it was part of their job as believers to care for the widows. Since the start of the coronavirus pandemic, the Barathans have been unable to travel to Sri Lanka but have seen the Lord at work. In September 2021, they sent funds to purchase supplies to make 60 food packages. A local pastor organised buying the food items from different stores, then church members gathered to put the parcels together and later distribute them.

To be working in the country of his birth is coming “full circle” for George. “I want to help people who are suffering,” he explained. “I want to do my best in helping them to know about Jesus.”

Pray for the war widows in Sri Lanka to know Christ as their Saviour. Pray for local believers to continue reaching out to the widows and the orphans. Pray for those impacted by coronavirus-related restrictions and for protection and healing for those dealing with sickness. 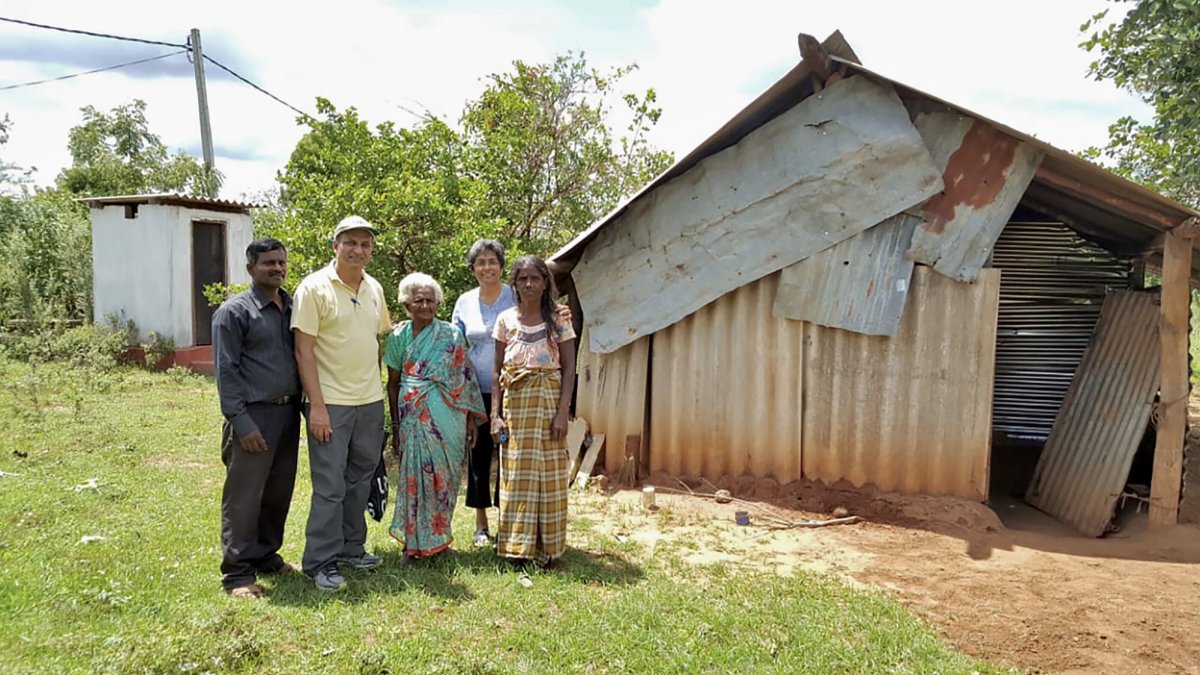 Sri Lanka: George (in yellow) with his wife Janet (behind in blue) in Sri Lanka visiting the war widows ministry. The woman in the centre of the photo is one of the first widows the ministry helped. After hearing her story from a local pastor (in black), they helped renovate her home so that snakes and other animals would no longer get in.