They worked as a government lawyer and nurse in their home country Brazil. Now, Rodrigo and his wife Daiane are preaching and teaching in a Roma village in Slovenia every week, excited to see a new community of Jesus followers grow.

“God is amazing and I love serving Him,“ enthuses Rodrigo. “That’s why as a lawyer I could give up my well-paid job and all my clients, and have no problem to live in missions today.For me, every day is exciting!”

Born and raised on the northern coast of Brazil, Rodrigo and Daiane are from Belem, a major city on the Amazon delta. Since 2019 they have served God in the tiny nation of Slovenia in central south-east Europe, exchanging tropical rainforests and year-round 30C temperatures, for Alpine mountains and sub-zero winters. “We had never worn winter clothes before, didn’t know how to choose or put them on!” Rodrigo says, laughing.

A vision for Slovenia

Rodrigo and Daiane were already heavily involved in church work, when in 2016 God began speaking to the newly married couple about serving Him abroad. A year later they visited a Brazilian friend who was serving God in Slovenia, where evangelical believers are 0.1 per cent of the population of 2 million. The couple were struck by the spiritual need they saw in the country: a culture shaped by Catholic traditions but now heavily influenced by New Age and humanism. They travelled down through other Balkan countries, asking God where they should serve, but Slovenia was now imprinted on both Rodrigo and Daiane’s hearts.

Back home, they returned to their jobs, but God kept speaking to them about Slovenia. “In the process of joining OM, there was one very special day when God resolved all the outstanding issues about our jobs, financial support and our apartment, “ remembers Rodrigo. “It was such a confirmation that He would lead and provide for us.” And so in April 2019 they moved to Slovenia.

Rodrigo and Daiane started a youth group and helped lead worship in a church in the capital Ljubljana. The church had a strong online presence, with complete services going out on platforms like YouTube. But when they started using bite-sized online podcasts, well suited to smartphones, the audience increased. One of the listeners was a young mother called Anja*, from a Roma neighbourhood over an hour’s drive away. One Sunday she came all the way to bring her son Daniel* to the evening service , and in floods of tears, begged Klemen, the pastor, and Rodrigo to pray for his healing.

Daniel was one and a half years old, deaf, blind and needing oxygen to breathe, from birth. Afterwards, Anja explained how she’d found the church’s podcasts, and recently heard Klemen declaring God’s power to heal. “I hadn’t met many Roma people before, and didn’t realise then how marginalised they are,” recalls Rodrigo. “I now see what a huge cultural barrier Anja had to overcome, in entering any place which is ‘Slovenian’. But she was just desperate that we pray for Daniel.” One week later Anja phoned Klemen, full of joy that Daniel was now breathing normally, without oxygen, and his actions showed he had gained partial vision and hearing. Doctors later confirmed this.

The community responds to the gospel

Anja invited  Klemen and Rodrigo to a celebratory lunch in her village – a big honour for people from outside the Roma community. They crammed into the kitchen of her father’s house with 12 of her family members. News of Daniel's healing had spread like wildfire through the community and when Klemen and Rodrigo were invited to share the gospel, everyone wanted to follow Jesus. The following Tuesday, another 25 people squeezed into the kitchen, and 20 more were saved. “We’ve been preaching and teaching in that kitchen every week since then,” says Rodrigo excitedly. “At least 30 people always come, and 25  have been baptised in the local river. Jesus has healed many people, and they come from villages all around to hear the gospel. People are also abandoning ‘folk’ Catholic practices and occultic traditions. It’s so amazing what the Lord is doing!”

With most new believers being illiterate, Rodrigo can’t use written discipleship materials with them, but finds people respond well to parables and stories, and visual depictions of the gospel. Meanwhile Daiane works with a dozen kids aged between four and twelve, who come every week, also loving artwork and stories. They were wild and rowdy at first, but are now calmer and better engaged.  Apart from Klemen, 4 or 5 members from the church in Ljubljana come as translators or helpers. “My language skills are improving, though I can’t preach in Slovenian yet. But I get lots of practice because I’m now spending lots of time with the Roma,” comments Rodrigo. They plan to launch a church soon, with meetings twice a week. “I will be the lead pastor but hope to raise up leaders from within the community.”

One big practical issue remains: they need more space. The house they’re gathering in now is overflowing. As a cheap and rapid solution, they’re planning to turn two old shipping containers into a church. “We hope to get this project completed before this winter so we don’t lose anyone,” says Rodrigo. “We want to see a vibrant church grow at the heart of this community, where Roma people can be themselves and worship God with their own culture and music.” 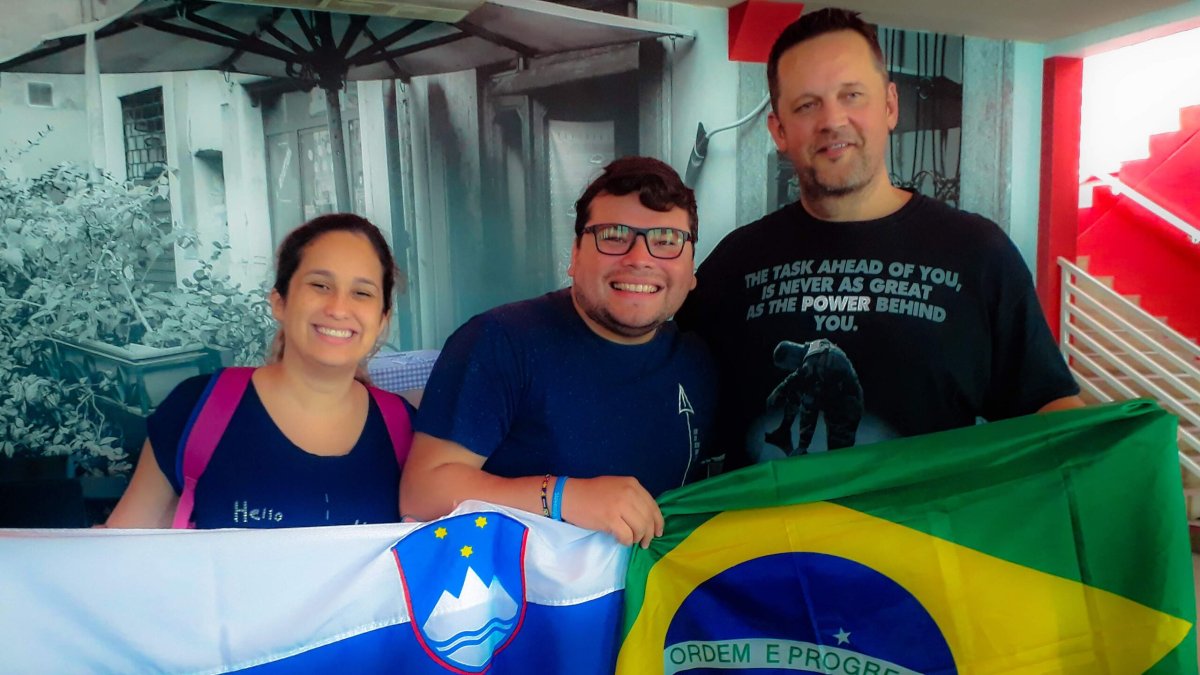 Slovenia: Rodrigo and Daiane (Brazil) and Klemen (Slovenia) work together to bring the gospel to Roma communities in Slovenia