Crew View: God’s hand on His child from Haiti

Izzy Alexandre (Haiti) was born into a family of eight siblings. Her parents were unable to care for all their children financially or give each one the attention they needed, so they placed Izzy and her older sister in an orphanage when she was six years old. But even in this new home, Izzy felt a lack of attention because of the large number of children living there. The orphanage was run by Christians and Izzy learnt about Jesus. Accepting Christ into her life, she felt recognised for the first time. “I felt that there was finally someone in my life who really cared about me, and so God became my best friend,” she recalls.

Izzy remained in the orphanage; never even leaving the premises until she was 21. She says, “I lived in a bubble. I didn’t know what life was like outside – I had never even bought anything in a shop.” A dramatic change to her way of life came in 2010, when a severe earthquake caused widespread destruction across Haiti. The children’s home did not escape. “From one moment to the next, everything I ever knew was not there anymore,” Izzy reflects. But even in the trauma, she felt protected by God. “The moment I left the building and took my first step outside, the whole building collapsed behind me. Most of the other girls from the orphanage were badly injured and two staff members and five children – my close friends – died. This was the most challenging time in my life. But the fact that most of the children survived was a miracle”.

Having lost everything she owned, Izzy lived in a tent for the next months. She had to adapt and describes it as finding confidence and purpose: “Before this tragedy happened, I was really introverted, but suddenly I became a voice for others. I was one of the oldest in the orphanage, so I helped the younger children to not give up, mentally. I facilitated arrangements for the helpers who came from other countries to take medical care of survivors after the earthquake and I helped translate for them.”

Izzy found a job in a guesthouse for reconstruction workers. One Sunday in 2017, she was early to collect new guests from the airport and decided to go to a church, where volunteers from Logos Hope were speaking about their work and asking for local helpers. Izzy says, “The minute I heard about it, I knew I wanted to do it.” She became a port volunteer for the ship’s call in Port-au-Prince.

After her mission experience with the ship’s crew, Izzy thought it would be impossible to raise the funds to join full-time. But back in the guesthouse, she shared her experiences with clients. “The spiritual need of people that I could see in my own country through the work I had done with Logos Hope was still in my mind.” Eventually, guests and even the organisation behind the guesthouse offered sponsorship for Izzy to join the ship in 2018.

Izzy describes what God means to her: “He is my father who always takes care of me, always protected me and provided my path.” Serving on board, she has been able to deepen her relationship with God more, by focussing on His Word and spending time alone with Him. She is still amazed that the little girl who was brought to the orphanage has ended up in mission, on a ship travelling the world to share good news.

Her time on Logos Hope is coming to an end and Izzy plans to continue serving God; first in a short-term mission trip to Germany with the organisation that oversaw her orphanage in Haiti. 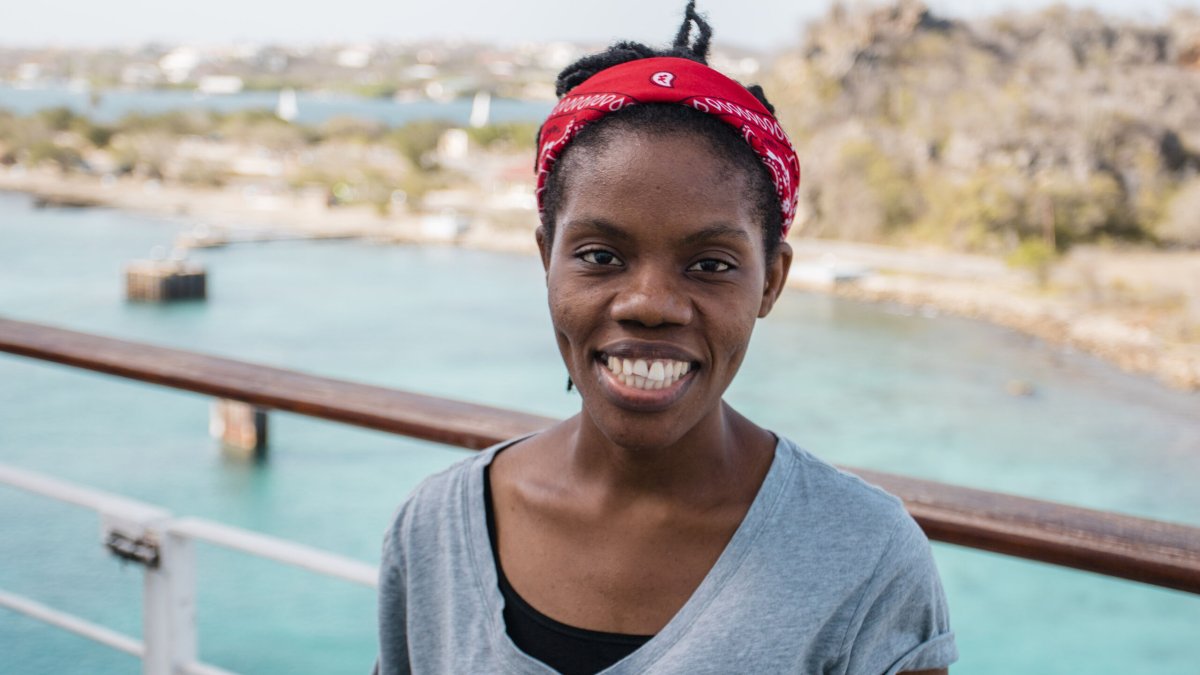