"I wanted to cut my hair and become a female monk," said Mom, an OM worker serving in her home country of Cambodia.

The 38-year-old has served with OM in Cambodia for many years, but when she was younger she lived with a female monk in the majority Buddhist country. There, she learnt about Buddhism and fully believed in what she was being taught. Mom later attended a Christian youth programme, where she heard about Jesus, but she couldn’t yet leave her previous teaching. Despite all of the peace that Buddhism boasts about, Mom experienced a deep sense of depression because she felt no purpose in what she was doing. Twice she attempted to commit suicide, once by jumping off a bridge into a river below and another time by swallowing prescription pills. Miraculously, she survived both attempts.

Then, when Mom was 18, some Christians visited her house and shared about God’s plan and purpose for everyone to be in relationship with Him. Suddenly, Mom knew the answer to her question! “God gave my life meaning,” she said. Mom was invited to church and began attending; seeking to answer further questions that had remained unanswered. “At first when I became a believer, I prayed like I had as a Buddhist,” Mom shared. This meant chanting words from the Bible as she had the Buddhist mantras. She viewed obedience to Jesus like she had viewed obedience to Buddha. “I had to try to be perfect, but I couldn’t,” Mom recalled. “I felt stuck.”

It was through two men at church, who visited her home on a weekly basis to teach her, that her young faith began to grow. “They shared the Bible verse about God’s burden being light,” Mom shared. “I didn’t think I could change, but God could do it!”

For the next two years, these men continued to disciple Mom, engaging in deep conversations, bringing her to seminars and discovering answers about God in His word. It was this intentional discipleship that changed Mom’s thinking and opened up her heart to help others.

She now serves with OM in Cambodia, engaging in gospel outreach and discipleship, even as she continues to learn through the OM ‘Vibrant Communities of Jesus Followers’ training about God’s commands to “multiply” as believers. Joining her fellow OM workers, she makes weekly visits to various villages where they have established contact, bouncing along rutted roads and bringing Bible lessons, praise songs and English classes. She also organises a Bible study in a nearby slum, where she prays and listens to the women. Her goal is that the people she encounters would ultimately “share the gospel to other people” and “train the people like we train them," she says.

This vision has found fulfilment in at least two believers: a mother, Sangmao, and her son, Dorn, a former high-ranking Buddhist monk. During one of the village outreaches, Mom met Sangmao and began studying the Bible with her, paving the way for her to accept Christ. The former monk also eventually made the same decision after seeing his mother’s life changed by hope. Today, both Sangmao and Dorn participate in gospel outreach to the communities near their village and continue to be discipled by Mom.

Mom knows there are many others who––like her depressed former self––still need to hear about Christ’s love. She wants to help people––in her family, community and nation––discover the truth that has so radically transformed her own life: “God called you, and God has a plan for you.” 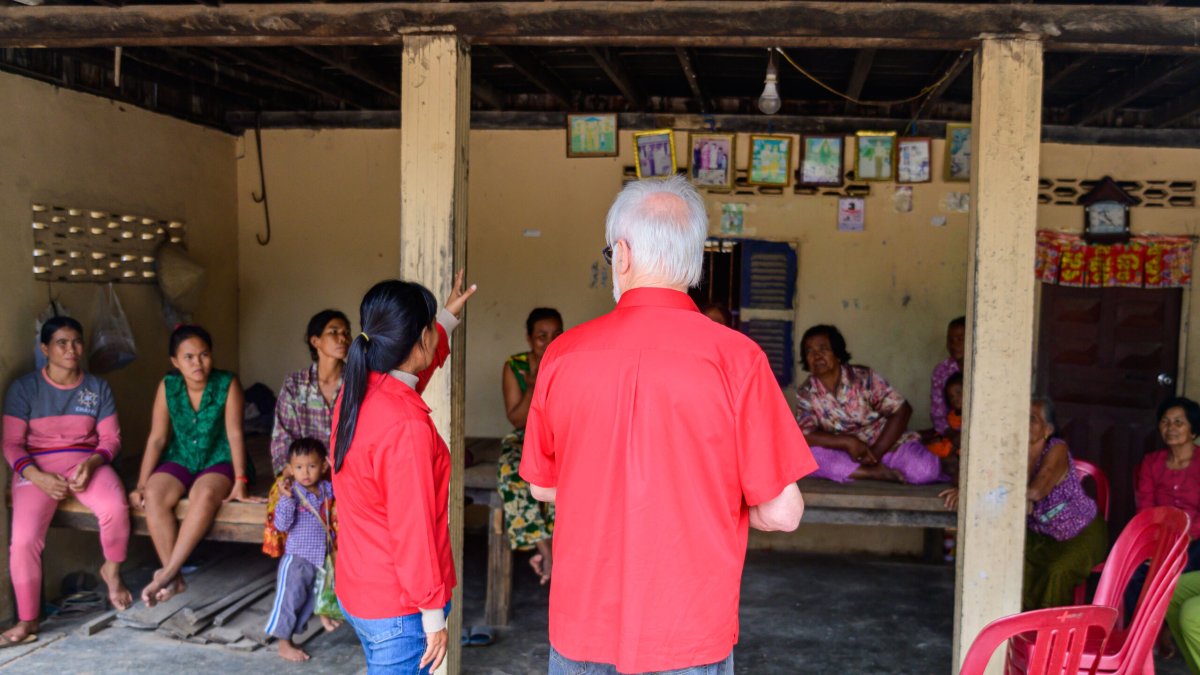 Johan and Mom from the Cambodia team leading a bible study in a village.