The importance of sharing the love of Christ with others is something both David* and Adèle* recognised quickly in their walk with the Lord. “In our country, we were used to receiving Jesus followers coming to our island, and they were really good role models in my life,” said David. “I understood very early that the gospel is to be shared, and we cannot keep it for ourselves. You are on a journey, and God is calling you to share your faith. And for me, I was ready to go wherever God told me. Some people have a call to stay, and others have a call to go.”

David and Adèle were born on an island in the Caribbean. In high school, they knew each other and reconnected years later while living in France.

When Adèle was a little girl, her mother attended church for a few months and took her daughter with her. The experience impacted Adèle, and years later, when she was 15, she remembered: “I was sleeping, and I just woke up. This voice told me, ‘It’s a good day to go back to church.’ The voice was very loud but very gentle also. And I just thought ‘yeah, it’s time’.” Adèle began attending church regularly and grew in her faith, always keeping in mind the picture of God waking her up, taking her by the hand and leading her to church.

When David was 15 years old, OM’s first ship, Logos, visited the island. “I grew up surrounded by water. My father was a fisherman, and ships and the sea were always a passion of mine. When I visited Logos, I knew that this was the place that I should be,” David remembered.

“I’m not a ship person,” admitted Adèle. Nevertheless, knowing David’s call of serving on an OM ship, she prepared herself to go as well, praying for the Lord to give her joy to be on board.  “I knew sharing the gospel with others was something important, as a Christian, to be committed to; to be willing and to be available to go,” she said.

In 2002 David, Adèle and their two-year-old son joined OM’s previous ship Doulos for three years to serve in the bookfair and then as the volunteers’ coordinator.

Returning to France, the couple attended Bible School in a suburb of Paris and prepared to move overseas to share the gospel with those who had never heard it. Adèle recalled “after Bible School, we understood God saying: “Wait. I will tell you when to go.” And so, they waited. For nearly two decades, they raised their son and worked in France; David as a hospital chaplain and Adèle as an assistant manager. Their period of waiting was not passive but active as they continually sought His direction and guidance. “We are all called to share the love of Christ wherever we are. God is using us where we are in our family, our neighbourhood, our city, our country or overseas,” David said.

The couple continued to be involved with OM through events like TeenStreet and by serving on the Board of OM in France. At church they advocated for ministries and missions and encouraged people to get involved in whatever way they could. Another way they stayed involved was through financial giving. David explained that receiving financial support while onboard Doulos and in Bible college “was a blessing for us. It made sense to carry on and to bless others financially. It’s important to share what we receive. It’s a way to give glory to God.”

Sometimes, David added, gifts come from people who do not necessarily have a lot, but they give with all their heart and are happy to share what God has provided them. “To give is part of the Christian life,” he said.

In late 2021, David and Adèle boarded OM’s Logos Hope to serve in the People Services department, providing pastoral care and mentoring. Adèle also works in the bookfair twice a week. Joining the ship during the coronavirus pandemic was challenging, but the couple is confident in God’s timing. “God is working—even in the midst of this weird time,” said David. “I don’t want to miss what He is doing, and I would like to work with Him and to discern where He is at work for me to join in. Even during the lockdown, it’s helped us to concentrate on what things matter and are very important in our lives.”

“God didn’t run away because of Covid-19. He is taking care of us, helping us to keep going on with joy and peace,” Adèle added. “He keeps telling me: ‘Do not be afraid. Just hold on to Me. Trust Me. Follow Me. Stay available.” 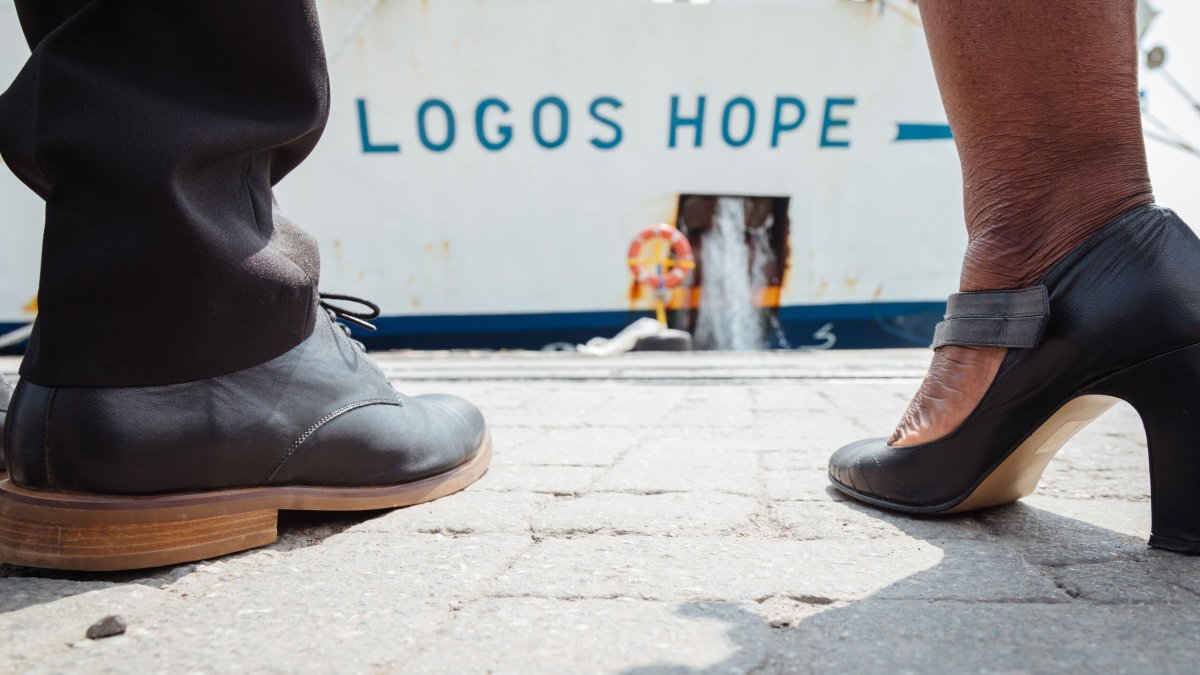 International: David and Adèle served onboard the organisation's previous ship, Doulos, before moving to France where they waited for God to direct their next steps. Almost 20 years later, they boarded Logos Hope. Photo by Jun Han.