Six and a half million people had been welcomed up the gangways of OM’s pioneering vessel in her first 17 years of service. Logos had docked in 108 countries and was touring Latin America for the first time. On 4 January 1988 she left Ushuaia, Argentina; a city so far south it gets the nickname ‘The End of the World’. It sits on the Beagle Channel, a narrow stretch of water between Argentina and Chile. This notoriously hazardous strait is littered with small islands and rocky obstructions. Logos was being guided out of port on a stormy night by an Argentine pilot who disembarked before the ship had made it safely through the channel. Transferring him to the pilot boat by rope ladder in rough conditions took time. Logos had to slow and drifted. Resuming power to follow the course indicated, the ship struck a submerged rock shelf. 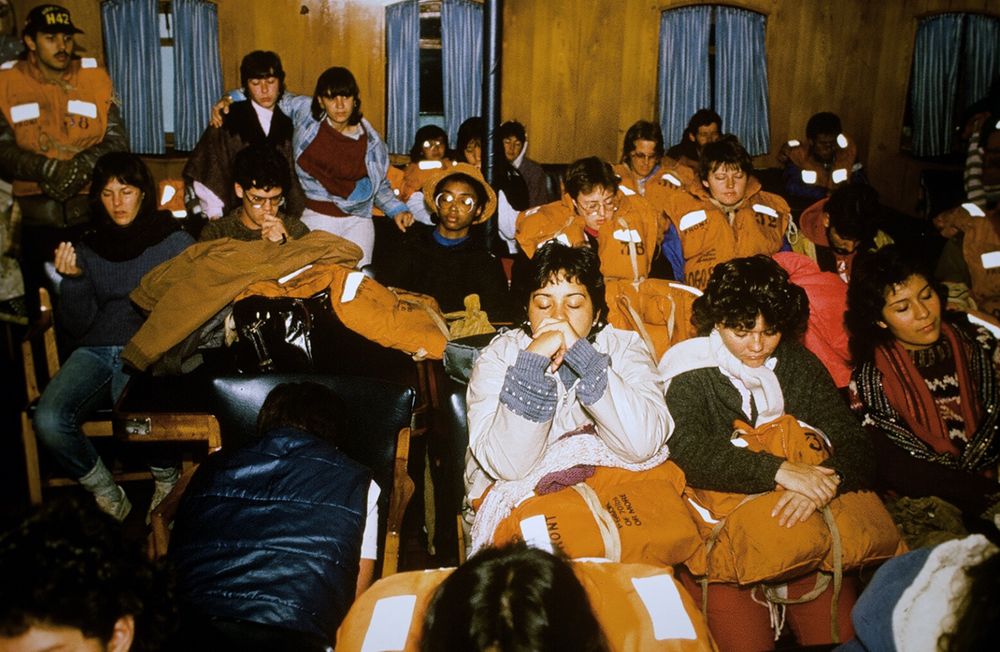 It was just before midnight. A loud grinding noise and jarring movements woke the sleeping community. Some feared there had been an explosion. Assembling in the dining room, the volunteers were told what had happened, and not to panic. They prayed. The eight children were allowed back to bed, provided they slept in warm clothing and with their life jackets on hand. Attempts to reverse off the rocks didn’t succeed, nor did de-ballasting – reducing weight by pumping out the seawater tanks. Captain Jonathan Stewart (United Kingdom) decided to sit it out for a few hours. Perhaps the rising tide would float Logos off the rocks.

The wait brought an undoubted lifesaver: daylight. But it became clear that the ship was speared on a pinnacle – in fact, in three places. And now she was lighter, having de-ballasted, she was more buoyant. With each wave, Logos was being lifted up and pounded back down on the rocks. The hull started to give. Water got in; coming up through a shaft and spreading to the book hold. It wasn’t long before the flooding caused Logos to tip drastically to the port side. All 141 people were called to stand on the starboard side, but that couldn’t re-balance the vessel. At 5:00 am, the captain gave the order to abandon ship.

“Although it was scary, I still had peace,” said Kathy Coy (USA). “I know it was only God’s grace that kept us calm.” Several accounts confirm that even the children weren’t fretful. They included a six-week-old baby. Judith Fredricsen (New Zealand) was in the ship’s clinic with a broken leg in a plaster cast. She recalled everyone working together as she was helped outside. 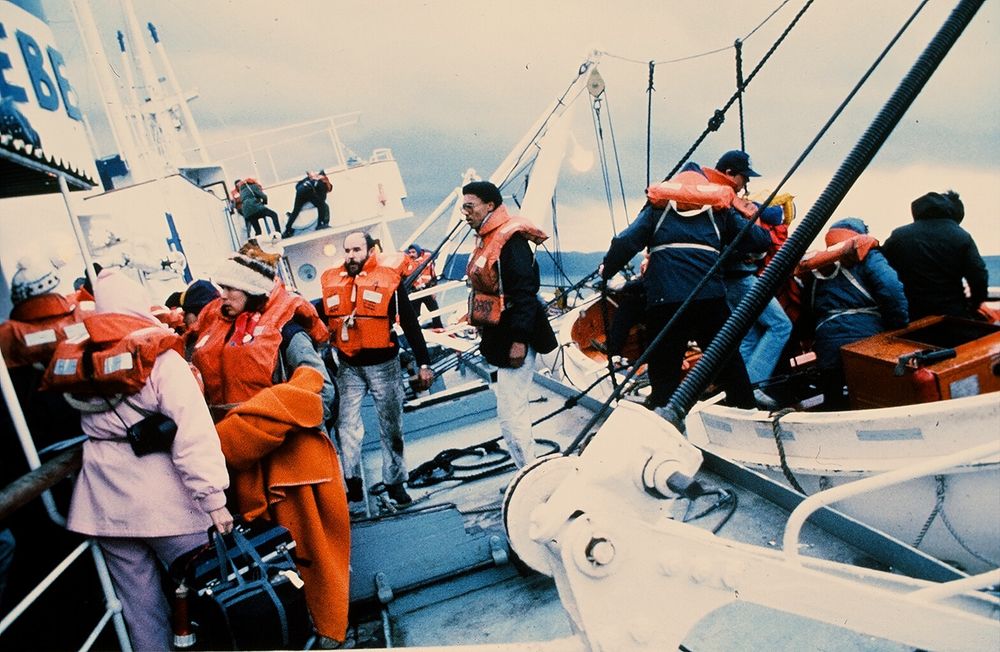 Logos had tilted to a 20-degree angle. People slid along the deck as they tried to get to the lifeboats in freezing rain. Lowering the boats at such an angle was difficult and dangerous: training courses warn seafarers to prepare for loss of life if they attempt such an operation beyond a 15-degree list. One lifeboat became stuck, but men were able to lift it down with physical strength they couldn’t explain.

The Chilean Navy responded to the distress call. As they watched the ship being abandoned, the military called it ‘a miracle’ that all souls got off Logos without injury. The 141 crewmembers in six lifeboats were quickly rounded up. Logos’ doctor, Andrea Lewis (United Kingdom) recalled, “There were lots of hugs and tears and a head count was done and had to be redone, as the Navy did not believe that we could have 100% of our number!” One man rejoiced that he hadn’t even missed a meal.

But they lost all their possessions. The valuables they’d grabbed from their cabins – Bibles and cameras – had to be left on dining room tables at the last moment. $700,000 (US) worth of uninsured cargo and contents was forsaken for what really mattered.

OM Ships’ coordinator, Dale Rhoton (USA), wrote later: “The thought that kept me sane during those trying days after the shipwreck was: ‘The valuables are safe!’ Not one of the 141 valuables was hurt in the least. People familiar with evacuations under similar circumstances are amazed. We bow our heads and worship.”

As they looked back from the Navy rescue boats, not yet able to fully take in what had happened, the stunned missionaries saw a rainbow. God’s ageless symbol of promise and preservation was streaming across the sky and beaming down on Logos. Their journey of recovery was still ahead, but once on land, Logos’ crewmembers made lists of all they had left behind on their floating home – which some had lived on for several years. Together, they burned the lists; surrendering their losses to the Lord and His purposes.

Christians in Punta Arenas, Chile, where the ship had just spent Christmas, now rallied round to receive the refugees: providing food, clothing and temporary accommodation.

Back at base in Germany, the annual conference for new joiners to OM was being held. Dale Rhoton gave a talk to the incoming volunteers on the morning of the fifth of January. He spoke on a Bible passage from Lamentations, where the prophet Jeremiah recalls God’s great faithfulness despite the destruction of the holy city, Jerusalem. Dale said that OM hadn’t experienced any real tragedy like the one Jeremiah was trusting God through. The passage took on new meaning for Dale by lunchtime, when he received the news in a phone call from South America. The new recruits were told there was no longer a Logos for them to serve on.

Meanwhile, the survivors were preparing to split up. “We realised that our group would be disbanded as we were scattered to a variety of destinations: other OM land bases or repatriated back to our homelands and previous lives,” said Dr Andrea Lewis. “Goodbyes were emotional and it was a defining moment in my life. I experienced the bonding that comes when you go through adversity with others and then separate; knowing that you will probably not meet the majority again this side of heaven.” The loss of the ship was broadcast around the world. Support surged back. Telegrams and letters arrived at OM’s offices; expressing sympathy and offering help. Correspondence came from governments, from well-known figures like the evangelist Billy Graham, from Sunday School children, shipping agents and book publishers. The ship’s wake rippled far and wide. The ministry had a special place in hearts right around the globe.

Money was donated to meet the immediate needs of the Logos crewmembers and cover the expense of flying them home or sending them to other mission outreaches. Teams went inland in Latin America; mobilising churches in Chile, where connections had been built in the previous months, and Argentina, where further ports were lined up. Some crew transferred to the sister ship, Doulos, in Asia.

Another floating ministry was Youth With A Mission’s hospital ship, Anastasis. From that vessel came a faxed message to OM’s founder, George Verwer; to say an onboard prayer meeting was being held and a collection would be taken. Unpaid volunteers wanted to give to fellow unpaid volunteers in need. “Expect 3,000 US dollars – how do we get it to you?” Those on the first Mercy Ship reminded the OM Ships community of a shipwreck in the Bible, where the Apostle Paul’s vessel runs aground. Though the ship is lost, God preserves every hair on every head. “Acts chapter 27 – no loss of life – used for good. With you all the way in Jesus’ name,” the fax concluded. 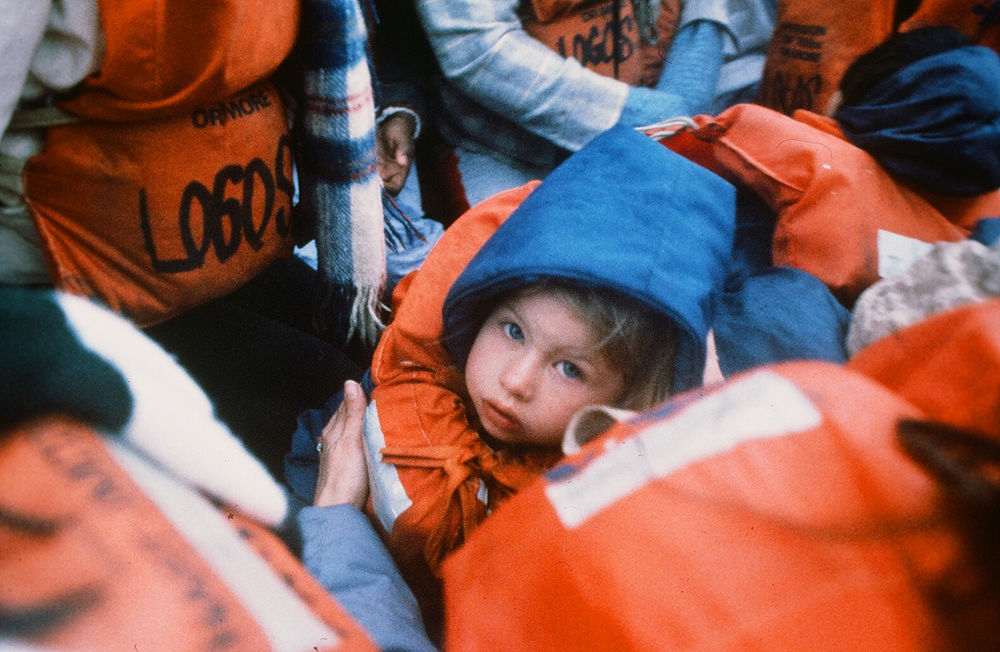 Siblings who were home-schooled in Georgia, USA, had been learning about missionaries and saving up their pocket money. Their donation of $13.17 was one of the first donations received in OM’s US office. The children admitted that it may not buy a ship, but it was a start.

More money came. It became clear that the first thought in donors’ minds was a replacement vessel. Within eight weeks, 1.4 million dollars had been received. International partners in the Gospel clearly intended there to be a Logos II.

A Christian outreach in Nigeria wrote to explain a traditional proverb that interprets the burning down of a chief’s palace as the sign for a better and more modern one to be built. The letter said, “We sincerely pray this will apply to Logos!” An appeal to fund renovations to the ship was already underway, since the ministry activities on board had outgrown the space available. A new vessel could certainly solve that.

Practical partners in Japan sent $25,000 and started looking in their dockyards for a suitable ship. In Barbados, churches earmarked a Sunday and pooled their offerings. Brazilians sold their valuables, including jewellery and a freezer. Venezuelans donated cows for a fundraising barbeque.

This collaborative response spoke powerfully, far and wide. An American pastor marvelled, “Perhaps, for the first time, I have seen how God’s people on every continent can rally to meet a common need.” 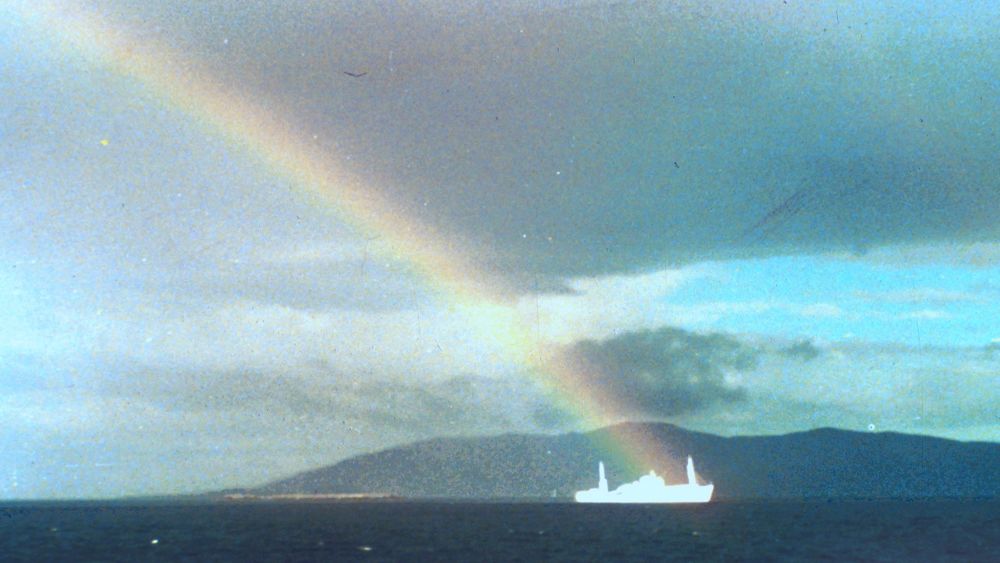 Dale Rhoton wrote to partners three weeks later: “The last video that we made of Logos was entitled ‘Logos is People’. We really believe that! Brothers and sisters, we have not lost a ministry. We have lost a tool. People are irreplaceable. Ministries are given only by God. Tools are to be used and then replaced… Logos was not lost through rusting in a port. She fell in battle! Our plans: FULL STEAM AHEAD!”

Logos never sank. She remains on the rocks; a beacon, warning other ships of the danger. Her sister ship, Doulos, and her successor, Logos II, have been retired – but the original Logos has continued to proclaim a message to the end of the earth for the last three decades. 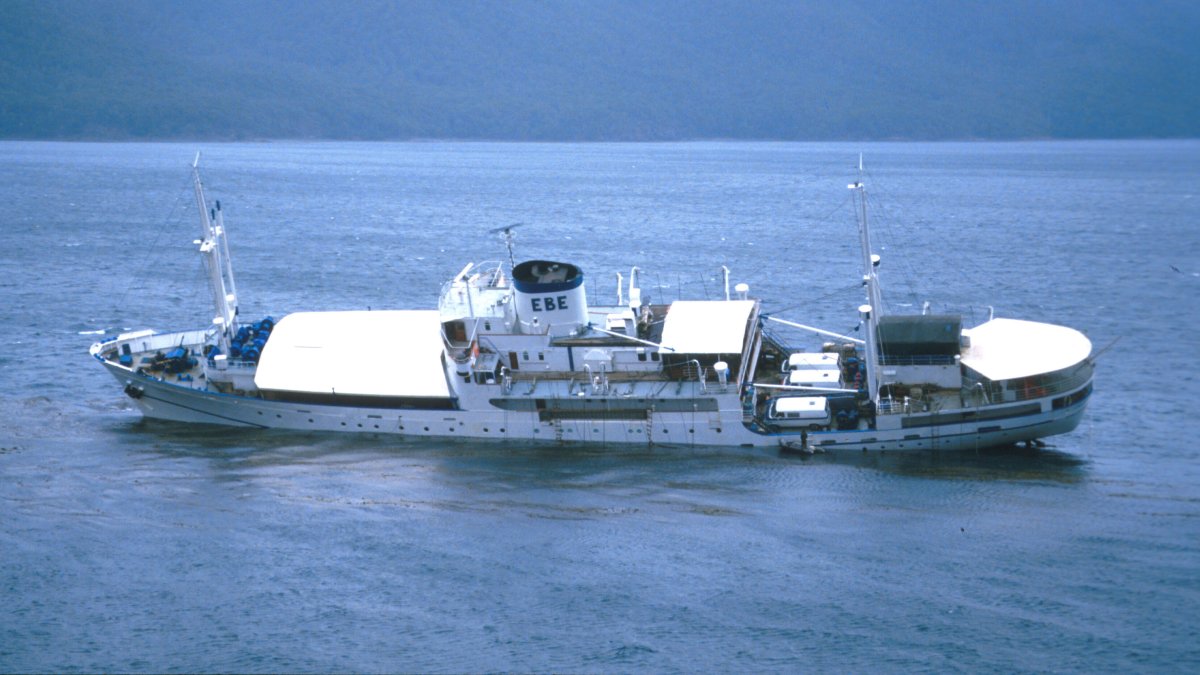 Ships: Logos on a rock shelf in the Beagle Channel 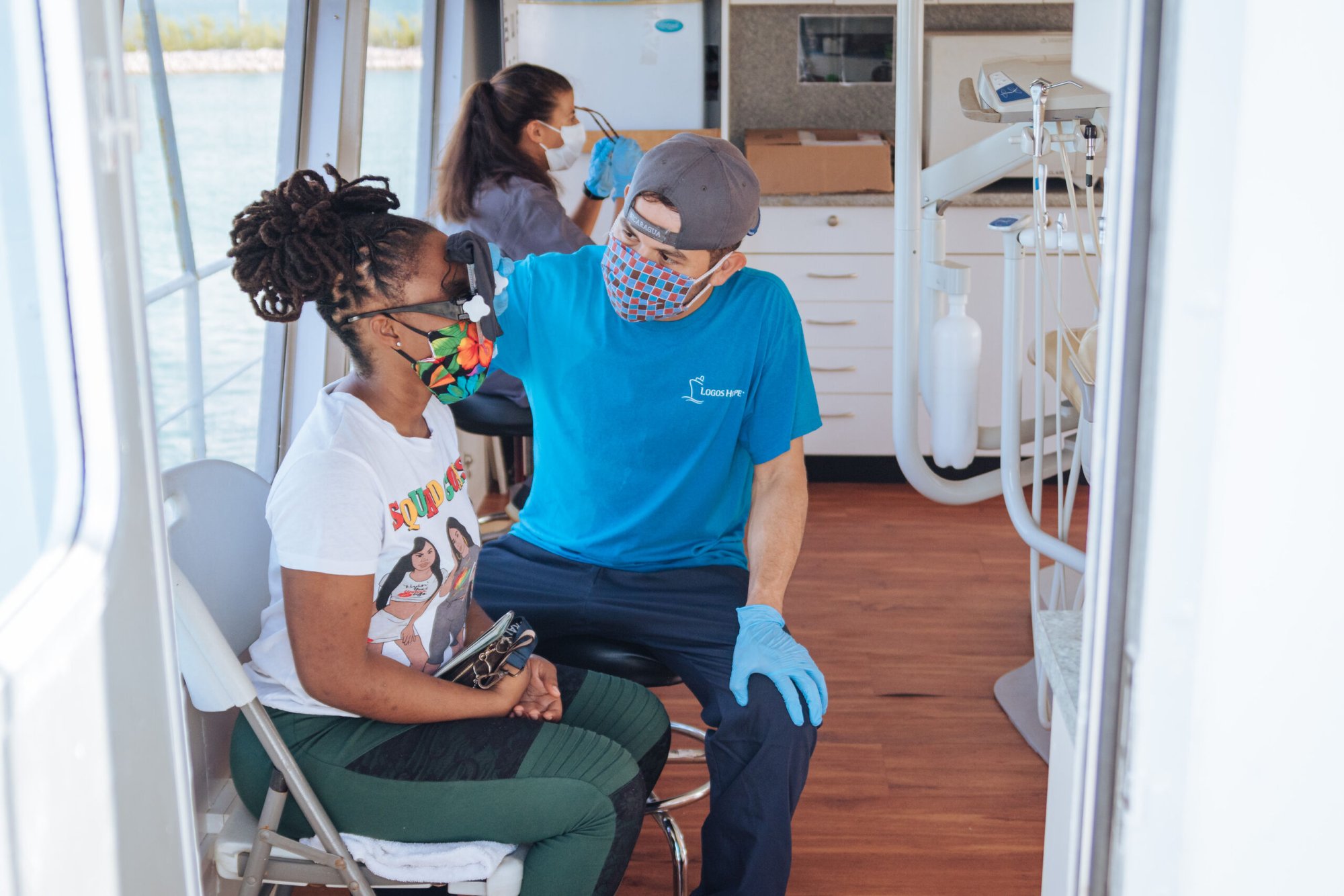 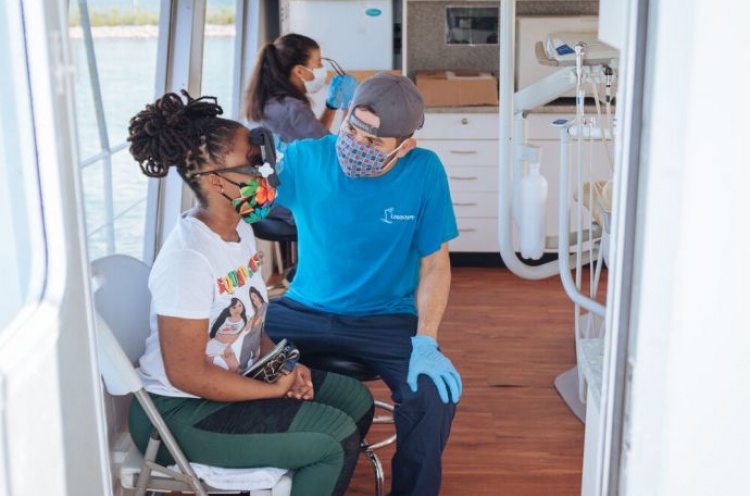 OM Ships :: Jareht hated his father, who’d walked out on five sons when Jareht was just four years old. By the age of 16, Jareht was close to ending his life. But God showed him what a true Father He is. Now, Jareht is serving on board OM’s ship, sharing God’s transforming love with others. 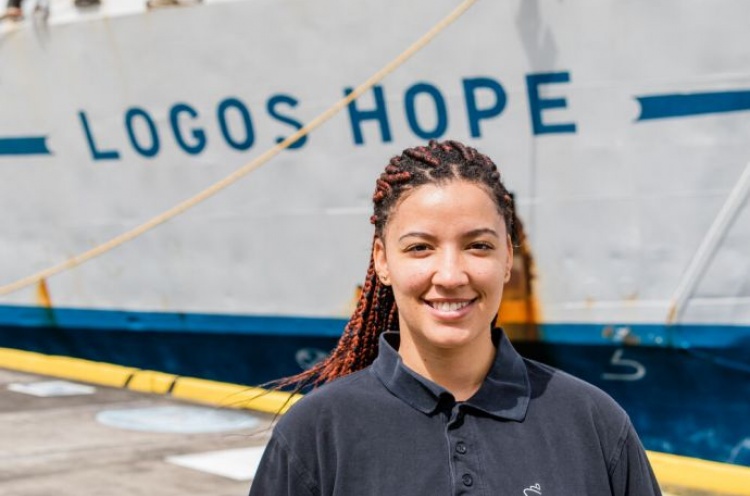