“My son and I travelled very far to reach the Tsaatan reindeer herders,” said Buyana*, describing their journey from the Tuvan Republic of Russia to a remote valley in Mongolia. A three-day road trip was followed by an eight-hour horse ride from the nearest Mongolian village. In a country where horses outnumber people, the animals are an essential part of everyday life and a common way to travel, especially to areas where there are no roads.

For three months in the summer of 2019, Buyana and her seven-year-old son, together with a short-term outreach team, lived among the Tsaatan reindeer herders in their settlement of tents. “They accepted me and called me their own person,” she said. The nomadic tribe originates from Buyana’s indigenous group, the Tuvans in Siberia, and they also speak the Tuvan language. She offered a children’s programme and worked with teenagers during their visit, drawing on her experience of serving in her home church.

Called to the Tsaatan reindeer herders

“I had asked God to show me if there is a people group I should go to,” remembered Buyana. “As I prayed, the desire in my heart grew and grew.” Her prayer had been prompted by a conference on bringing the good news to Shamanist communities. Then a believer in Mongolia phoned Buyana, telling her they needed someone to go to the unreached Tsaatan reindeer herders. “I understood that God has called me,” she said. Her first outreach further confirmed this direction. Since then, she has made two more trips to the Tsaatans. “If it’s not a calling from God, it’s very difficult to work in such places,” she emphasised.

Sent out by her Tuvan church, Buyana and her son plan to return for three years where she will invest her skills in educational teaching, translation, and children’s ministry. Once the borders are no longer closed due to the coronavirus pandemic, she can relocate and hopes others will join her as she picks up the baton from the previous believer who served there. Mother and son will be based from the Mongolian village closest to the reindeer herders’ camp and again ride on horseback to stay with them for extended visits.

“We won’t be able to live there in winter as it is too cold and we are not used to it,” Buyana stated. Accustomed to the Siberian climate that can drop to -40˚C does not qualify them for withstanding the harsh conditions of sheltering in a tarpaulin tent while temperatures plumate to -50˚C. Though the Tsaatans keep a stove burning in the tent’s centre, the indoor temperature doesn’t rise above freezing. “It’s a four-hour walk to collect firewood,” added Buyana, explaining that the nomadic tribe allow the reindeer to determine their camp’s location, a practice that reflects their animistic beliefs.

Trained to translate into the Tuvan tongue

“I want to have something I can give them,” said Buyana. “It’s important to share the gospel in a simple and relevant way.” She volunteers alongside Bible translators in Russia; together, they are currently preparing oral Tuvan Bible stories and gathering media to take to the Tsaatans.

Buyana’s passion to translate began after her degree in history education, continued while training as a lawyer and remains today in addition to her employment at a school. “I was inspired by a love for my own language and a concern for my people,” she expressed. “I translated Bible courses because giving people the whole Tuvan Bible was too overwhelming and difficult for them to read.” The Bible course helps individuals to read and understand the Tuvan Bible, which has been available since 2011. A Tuvan children’s Bible storybook, recently published by her colleagues in partnership with OM’s media team, helps Buyana teach in Sunday schools.

“It’s great to translate resources,” she said. “But the main thing I wish to give is God’s love.”

Buyana was raised in a village at a time when remote Tuvan regions were untouched by Christ’s message and many practiced Shamanism and Buddhism. At university in the city, she visited two churches with the aim of writing down her observations. What started as a history assignment turned into the beginning of following Jesus and belonging to God’s family.

“I used to be a very lonely person,” reflected Buyana. She grew up in a family of four children, but by the time she was a young adult, she had already suffered the loss of both parents and two siblings. “In Jesus I found someone who will never leave me, and in the church I received a new family,” she described. “I lived with deep wounds and unforgiveness in my heart,” she continued. “But God found me and gave me strength to forgive. He has given me a new heart, a new life, high goals and joyful days.”

Buyana often visits small Tuvan churches to encourage believers. “Our churches are about 15 to 20 years old and there are not many,” she said. “Nevertheless, God has changed the lives of many others and there are committed workers.” Some people ask her: “Why go to Mongolia, when the whole of Tuva is not saved?” Jesus’ example convinces her to take this step. “Jesus left His own people to go to others so they would know Him too,” she replied.

Just as she experienced in her life and nation, she longs to see the body of Christ grow among the Tsaatans. “I pray their hearts would be ready to receive God’s Word,” said Buyana, who knows of only a few Tsaatan believers in the village. “I really want there to be Tsaatan translators, leaders and pastors,” she declared. “Then they can disciple their people further and share the gospel with other peoples!”

Based in Austria, OM’s media ministry equips local ministries around the globe with relevant print and digital media that helps them share the gospel and strengthen believers in their communities. 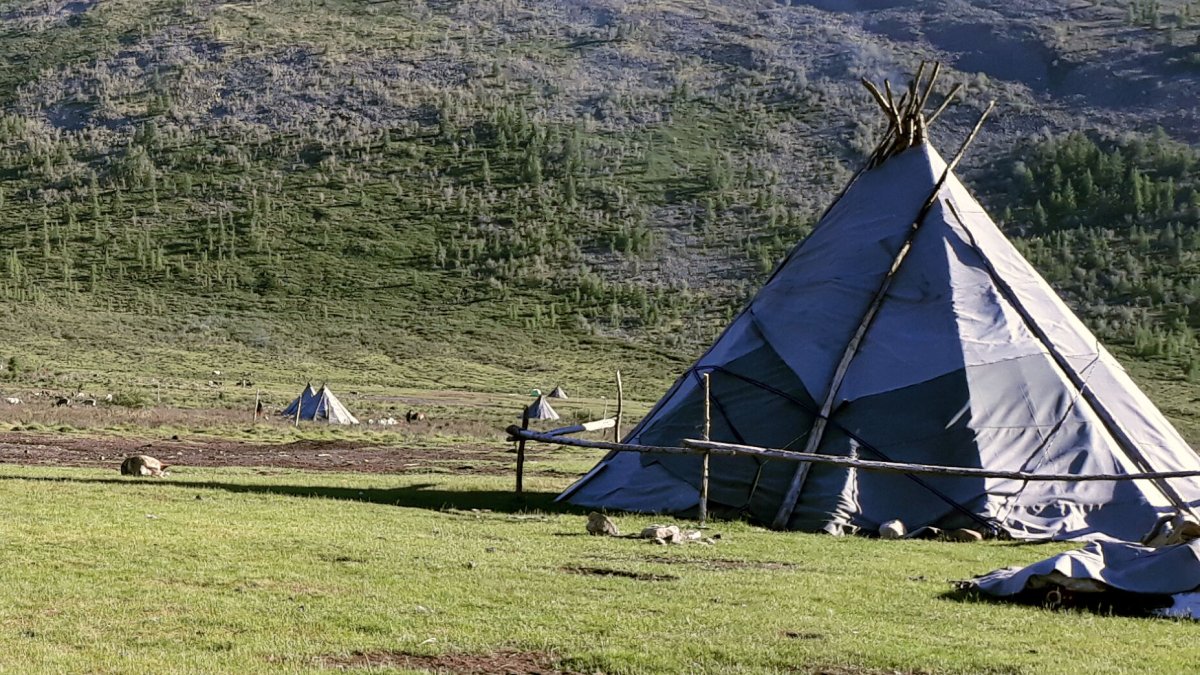 Mongolia: View of the nomadic Tsaatan reindeer herders' settlement of tents in a remote valley in Mongolia. Photo by Buyana.