Stories of our heroines

During his traditional New Year speech, President Emmanuel Macron told several stories of people he considers to be heroes in the face of the Covid 19 pandemic. It occurred to me to give a similar update on a few of the many women that we (and some others) have been helping now for 12 years. You will see how different the stories are from one another, but also how God frees, forgives, heals, and restores in each case. We want you to be encouraged by this work because, in one way or another, you too are participants in the work that God is doing to fight the darkness.

Julie* She was only 20 years old with her whole life ahead of her to realize her dreams of working in the fashion world after taking sewing lessons in her home country. She was brave enough to lodge a complaint with the Nantes police against her “madam” (pimp). After this she was recognized as a victim of human trafficking by the National Court for Right of Asylum (fr: CNDA).

However, she had to leave for another town with the help of a charity, because her “madam” was also in Nantes. We were able to find a church there and visit her twice. She has changed a lot and is the mother of 2 children.

Lucie* This very young woman was being trafficked by her two aunts. How could you do that to a member of your own family? Many people prayed for her and by the grace of God, the police miraculously shut down her network and she was able to find a place for shelter and spiritual support.

She was also able to benefit from a 2-year programme to exit prostitution. Now, she is doing really well and has just signed a permanent contract with a care home as a housekeeper.

Patricia* Her “madam” forced her into prostitution by threatening that she would attack her mother in Nigeria if she didn’t comply. Patricia told us that she had a heart for evangelism and that she cried every day because of what she was forced to do on the streets. She liked to testify in song. During our night visits, she would hug Laureine (our colleague), holding her for a long time in her arms.

When her “madam” fled to Spain in fear of the police, Patricia and two other girls in the same situation were able to regain their freedom.

Patricia was able to find accommodation with long-term spiritual support and also join the programme to leave prostitution. She has just acquired her 1-year residence permit and, thanks to a secular job centre called “Mission Locale”, will be able to take part in a work integration programme.

Cloé* There are some encounters that hurt us more than others. This is the case when we find that some girls are clearly born again but trapped by networks that hold them captive. Cloe called us one day, telling us that she was locked in her room and that she had been beaten. She was extremely courageous and decided to take control despite the threats and filed a complaint. Today, there is hope in her life. She has found a job and an apartment thanks to the “Mission Locale”.

But her greatest happiness is to have been able to bring her two children aged 4 and 7 to France. She is no longer afraid to walk in the streets. She mustered up the courage to stand firm in God and now leads her church choir: “Music gives me hope. When I start to sing, I am happy.”

Janie* Like many others, Janie wanted to go to Europe, with no specific destination, to work as a hairdresser and earn some money. After a first unsuccessful attempt through Libya, she was helped on her way by a “cousin” who took her through Ghana. As soon as she got into his car, her cousin asked her to drink a black tea-like liquid and to promise, amongst other things, that she would pay the person in Europe and not report them to the police. What struck us about her journey was the cruelty of her “madam” who burnt her hand on a hotplate so that the French authorities would not find out that her fingerprints were already registered in another country.

One evening, after she refused to go out and work on the streets, her pimp threw her out. She then took refuge with a girl who had already reported the network and now lived with a French man. So, she too decided to report her network because she couldn’t stand being considered as a slave anymore.

Thanks to the help of several charities and Christians in the city of Nantes and elsewhere, Janie overcame her situation. Thanks God for her life today. She is married, and now works in a retirement home after completing training. Her French is remarkable.

The picture wouldn’t be complete if we didn’t mention the incomplete stories that still bring so much pain. Axelle* has not yet been able to overcome the anger that she feels as a result of being a victim of trafficking; Judith* is very fragile psychologically and relies on medication to live with the memory of being raped by three men here in Nantes; Kim* lost her father in March 2020 and her mother in December 2020 but has been unable to return to her country. Lou*, despite a strong case, has had her asylum application rejected twice. Alex*, despite obtaining a 10-year residency card, was used to transfer money between France and Nigeria and has ended up in prison for several years.

One of the major concerns right now is the consequences of the curfew. We could of course rejoice in the fact that these women are no longer on the streets, however, most of them live in housing provided by slum landlords, and their situation is more than worrying. They have to pay for their rooms even if they no longer have any income and they risk being thrown out. In urgent situations, we were able to help three of these women so that they did not end up homeless.

Another concern that other charities have also observed is that that more and more Nigerian women have their cases rejected by the French Office for the Protection of Refugees and the National Court of Asylum, which plunges them into instability and insecurity, especially since a return to their home country is out of the question. I have sent a letter to the heads of these two institutions. Pray that God intervenes with the decision-makers.

I would like to leave you with a quote from J.L. Packer to meditate on in these troubled times: “If you want to know how well someone understands what Christianity is, check out the importance they attach to the idea of being a child of God and having God for a Father” 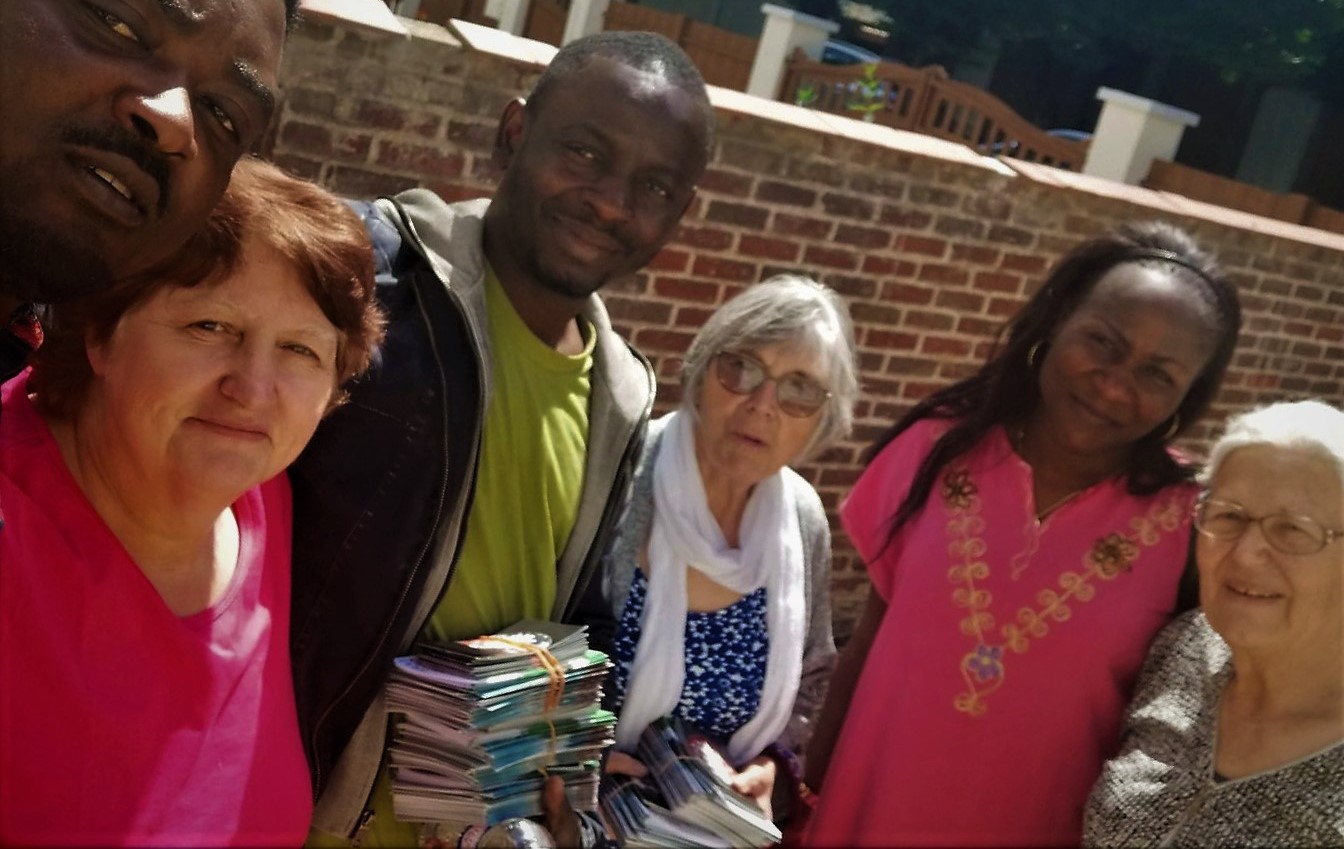 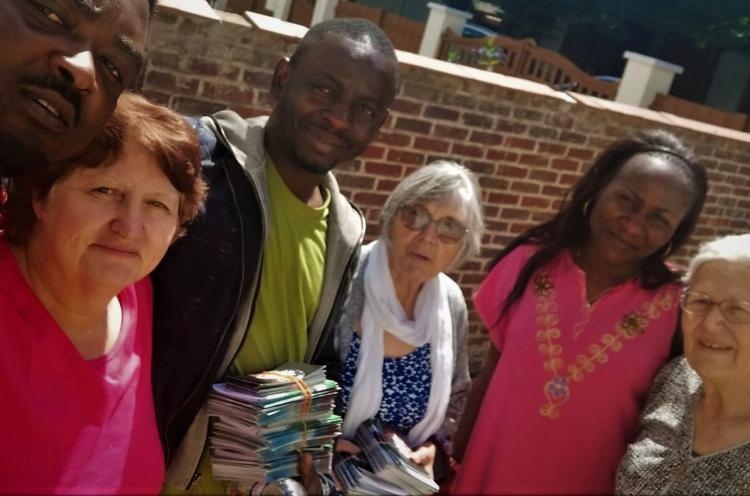 Nation-wide outreach day with the church of Louviers

During the national day of evangelism on 28 May 2022, we prayed that morning for the ‘La Porte de l’Espérance’ church in Louviers, Normandy. Here is a testimony by a member of that church called Claudine: 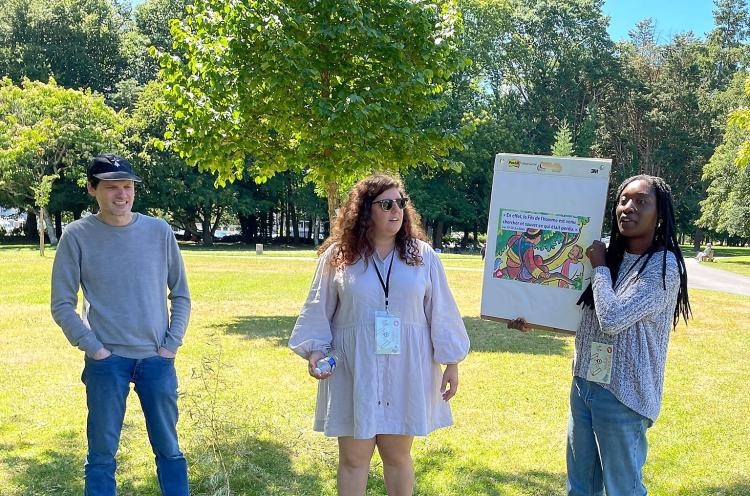 Over the course of three weeks, a team from the United States joined up with a small church in Lorient, Brittany, to share the good news of Jesus Christ with the inhabitants of the town. 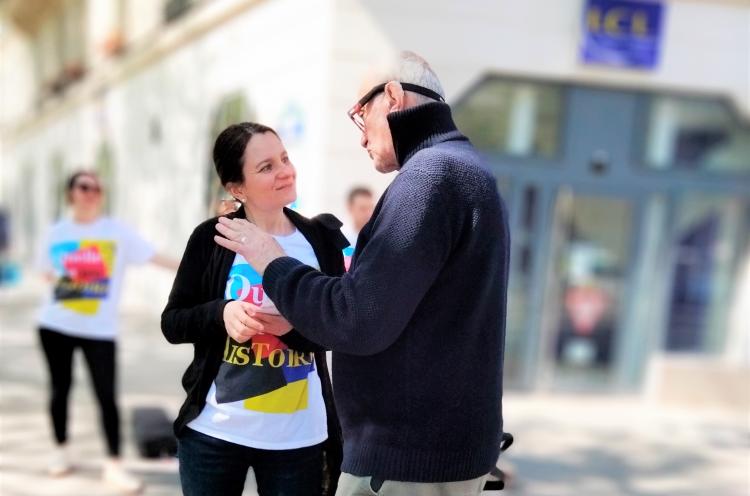 “When are you coming back?” asked Alain, the caretaker of the building in which the Gobelins Evangelical Protestant Church meets, and with whom we ran a weekend of evangelism at Easter.