On-call for such a time as this

It was Friday evening and Nicolas* and Sandra* were preparing to go on holiday the next day. The Swiss couple hadn’t yet packed, but they had bought enough food for a month so they didn’t need to think about this on their return. “We always keep a month’s supply of food,” explained Nicolas. “We are part of OM’s Disaster Response Team, so we practise what we teach.” Their provisions in case of emergency proved to be very timely considering the impending lockdown in Belgium due to the coronavirus.

That same evening, Nicolas and Sandra received a message from the Belgian Red Cross, calling on all volunteers to meet a growing demand for care. The couple have volunteered with the Red Cross as paramedics during the past seven years. On seeing the urgent request, Nicolas and Sandra immediately dropped their holiday plans. They didn’t realise it then, but their decision to stay prevented them from going to the area of Belgium most affected by the pandemic.

“We would have ended up stuck there in quarantine,” Sandra pointed out. “Looking back, everything has fallen into place — it’s not a coincidence that we stayed where we can work as paramedics.” OM in Belgium released the couple from their responsibilities in team administration and maintenance of the now closed guesthouse. Nicolas and Sandra increased their current commitment of one day a week with the Red Cross to five days per week.

“This crisis is different from others we have helped in,” said Sandra. “It is on our doorstep and we don’t know when it will end.” The couple normally travel to crisis zones in other parts of the world for a predetermined number of weeks, as they did in response to the natural disaster in the Bahamas in 2019. “We are used to more physical crises,” continued Nicolas. “This time we can’t see it, but when we put on our ‘moon suits’ (protective clothing), we know this is real.”

Why are you taking the risk?

“Why are you risking this?” neighbours asked.

“If we are not doing it, who else will?” Sandra replied with feeling and energy. “We believe we should do this because God wants us to help people.” Her neighbours were interested that she believes in God and conversations turned to faith a lot faster than before. “At the moment, people are scared, frustrated and so much more open to speak about faith,” said Sandra. “We have had very good talks."

“It’s like being a fire fighter standing in a burning building,” described Nicolas. “It feels right.” Clad in protective clothing, Nicolas and Sandra transported Covid-19 patients to or from hospital in the Red Cross ambulance. “I actually feel safer in our ambulance than going shopping,” remarked Nicolas. “Here I know what has been touched and can clean it.”

As Jesus followers, they should not be irresponsible or take unnecessary risks, Nicolas acknowledged. However, ultimately they are secure because they have the promise of eternity with Jesus. “I do not need to be afraid; I know where I am going and this gives me a peace I can share,” he emphasised. “My faith is giving me the strength to do this.”

What makes you different?

“Doctors and other paramedics tell us: ‘You are different!’” said Nicolas, surprised by the comment from fellow medical workers.

“We don’t know how we are different,” added Sandra. She was convinced little details do have a huge impact in demonstrating the gospel, such as holding a patient’s hand even though it is through a glove, treating people with dignity, or asking a respectful question. And yet these gestures by themselves seemed insufficient as a distinguishing factor. “The only explanation we can give is that the love of Jesus is somehow showing through us,” she concluded.

Nicolas and Sandra’s Red Cross colleagues found themselves considering the question: “Does faith help in times like these?” One colleague had a particularly difficult day clearing out rooms at a retirement home and burning the items. This experience hit him hard. The following day, when he could speak privately, he approached Nicolas. “You are the one with the real answers,” he stated, inviting Nicolas to talk about his faith in Jesus.

“We are the ones with the answers!” agreed Nicolas, recognising the unique opportunity God has given them to pass on His truth and hope at such a time. In fact, it is why they became paramedics — to be among people and share the gospel.”

“But in your hearts set apart Christ as Lord. Always be prepared to give an answer to everyone who asks you to give the reason for the hope that you have. But do this with gentleness and respect.” - 1 Peter 3:15 (NIV) 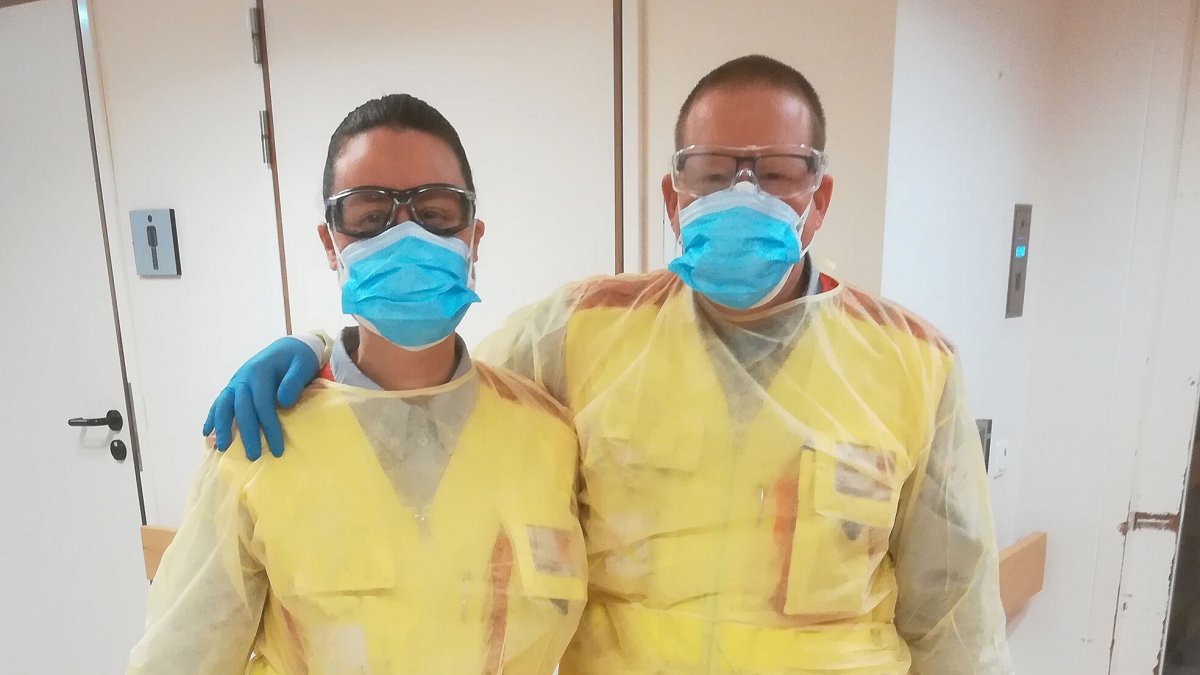 Belgium: OM couple serve as paramedics during the corona crisis.