1964 was the year when OM started to be a blessing for Romania. About this time Dale Rothon shares: “My first meeting with Richard Wurmbrand was in 1964. We sat together in a room with about 15 people. I asked someone the same age as myself, how he knew that the man sitting over there with the smile on his face had been 14 years in prison. Mihai Wurmbrand answered, “That is my father”. Mihai shared in Dec ‘01 that when his father was released from prison he phoned a neighbor. Mrs. W fainted so Mihai talked with him on the phone. His father had been invited to speak for some churches in Cluj and he went there one week before coming home.“ “We spent hours late in the night to hear him share his heart. He was on fire, ready to go back to prison even though he had been out only for a few weeks! Once, when I visited them, RW & Mrs. Wurmbrand talked in Romanian about a man. I asked who he was? The Ws responded that he was the man who had betrayed W. and because of him RW had spent 14 years in prison. Later that day RW and I went for a walk. We met a man on the street. RW introduced the man to me. I noted that the man had the same name as the man who had betrayed him. W embraced him. I mentioned to RW that that man had the same name as the man who had betrayed him. He responded to me, “Rothon, we all make mistakes.” “When I asked RW what can we do to help his country, he just said: “Bring The Word of God to mypeople and they shall be set free!” And this is how we started to put together a plan for smuggling Bibles into communist Romania. We saw the Lord open a big door for us to help our brothers and sisters in Eastern Europe so we prayed about setting up a team in Vienna. We did this in 1968.

THE YEARS UNDER COMMUNISM 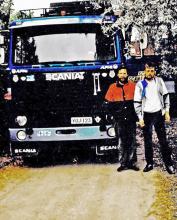 At first we were about 7 or 8 on the team and then the team grew. We had contact, of course, with other OMers, so many - certainly 100s. Over the years they received Scriptures from us to take to the believers in Eastern Europe.” The 70’s and 80’ represent the pinnacle of the communist power. More than ever before people were starving, their freedom became more and more restricted because of the secret microphones, raids, investigations etc. In 1971 Ceauşescu visited China, North Korea, Mongolia and North Vietnam. He became inspired by Kim Ir Sen and Mao Tse Dong. The Evangelical Churches refused to submit to this Cult of Personality, their reasons being the obvious contradictions with the Christian life they were trying to live. Because of this many were interrogated and imprisoned, or they paid with their life after being severely beaten in the communist prisons. During those years a lot of prayer warriors were battling in spirit for our country! Many risked their lives and freedom to bring in trucks full with Christian literature. Sometimes they would knock on unknown doors looking for people they never met before, or they would just leave the packages in a dark forest, they would wait for days at the border to bring in the trucks wondering what would happen if they got caught. But in this way a million Scriptures were brought to the persecuted church in Romania. And God heard the prayers coming from all around the world! In December 1989, Ceauşescu and the communist regime were finally brought to silence! And there was FREEDOM! People were kneeling in the city centers, praying the Lord’s prayer and shouting from the top of their lungs: God does exist! God does exist! God does exist!

In September 1991 OM Romania was born, as the team met for the first time! After completing training in the Mission Training School, a team made up of Ann Siebert, Hyun Mi Choi and Jo Bassham left Vienna and started the voyage to Galati which took approximately 2 days. “Together with Colin Brazier and Carsten Steins we drove the car to Cluj where picked it up Hung Jung Kim.  We were elsewhere on New Year’s Day, on the road, travelling together through Romania.  On the first day of 1992 we arrived in Galati, our new home - what great way to start a new year!” says Jo Bassham. From the start, the team lived together with the families of the Baptist Church and the Lord’s Army, while learning Romanian.  On 2 March a new member of the team arrived - a man, John Hooker, who was to be the first director of OM Romania.  In the next few years, many people have come out and have joined the team. There were many battles, but many blessings and open doors too! There were some disasters, some successes! Even though people said it was the hardest period of their lives, there were a lot of breakthroughs, a lot of contacts built with churches all around the country, especially through the summer campaigns which were called Love Europe. 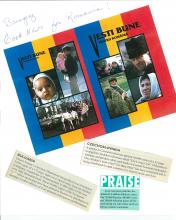 The first time when Romania was involved in ‘Love Europe’ was summer of 1992, starting with the conference in Pardubice, Czechoslovakia, followed by the summer evangelism campaigns. Three of these took place in Romania. The team said: “It was a great blessing to see people trying new methods of street evangelism: Drama, sketchboard, etc.” In 1993 there were 10 teams involved in evangelism in different locations in the country. Many people received the Lord: Men, women and whole families. It was an enthusiastic and wonderful time! Before concluding the evangelism, the team had already organised periodic meetings and discipleship courses. The OM team was very encouraged by what God was doing?  A girl said about that summer:  “Before I did not talk to anyone about my belief in the Lord Jesus, and what it means for me.  Now, I want to tell everyone!”

1996 marked a new era for the life of the OM Romania team.  As the team had grown, two teams could be formed.  The first part of the year was spent at the new mission base in Brasov.  The team which was living there would be the administrative team. Those involved in Galati would continue the work there.  At a given moment, they felt that it was time for a change. The team moved from Galati to Pitesti at the end of 1997. For several years there had been a summer team there, and the work had gone very well. There was a good link between OM and a few churches. John and the  administrative team moved to Brasov and the evangelism team worked in Pitesti.  We were involved in work with children and young people. Each developed new friendships: we held Bible studies in hostels with girls from an orphanage, we visited a home for old people and people with disabilities.

When the team grew to 10 people, we organised two concerts at the Trade Union House.  We then started to teach English at a school. Many of us have remained friends for life. Young people have been influenced and invited to go on a mission and to want more from life. But most importantly, people have heard the Gospel.  The OM work in Pitesti concluded in August 2001.

The work in Babadag began in 1998 when two young men came to live and work with a group of people who didn’t hear the Gospel before. Also during this period a group of youth from Tulcea used to come and share Christian Literature keeping in touch with the people who haven’t heard the Good News during the summer outreaches. Mariana Dogaru moved there in the summer of 2000 with a commitment for 6 month which turned out to be 6 years. Already forming a good team they started a small group of Romanians worshiping together and a church for Gipsy Turks. They also started a Literacy School for the Turkish children. In 2002 Luminiţa Drăguşin, Esther Clarke and Junko Myasaka joined the team. Together they were involved in both Romanian and Turkish Church. „During the 3 years of Literacy School happening in the ruins of an old sugar factory, God has blessed us with tens of children who learned how to pray, who met with Jesus and saw many of them continuing their studies in the city.

After that The Lord blessed us with a building right at the centre of the community. In time this one was renovated and became a kindergarten for the kids in the Bendea neighborhood.” Some of the kids used to bring their parents to church. Only 10% of these kids used to go to school back then. After 8 years of kindergarten, the percentage increased so much that even the teachers and the authorities of the city noticed. Sometimes trips were organized to take the children from both churches to the mountains. This was indeed an event for them because some had never been outside their city.

After the departure of the Hooker family (John and Petronela), the work was taken over by Herbert and Inge van den Berg in 2004 and then in 2008 by Rafael and Alice Nastase.